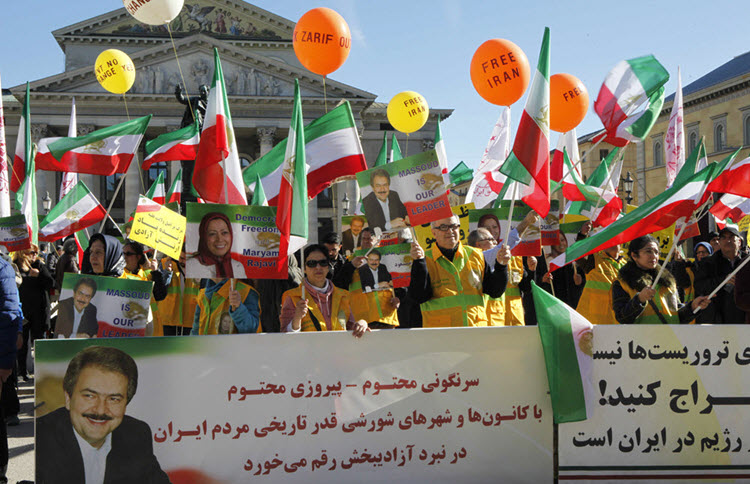 London, 18 Feb – Supporters of the Iranian Resistance gathered in Germany on Sunday to protest the inclusion of the Iranian Regime’s Foreign Minister Mohammad Javad Zarif at the Munich Security Conference.

Members and supporters of the People’s Mojahedin Organization of Iran (PMOI/MEK) rallied outside the global security summit with banners stating that the Iran Regime is the number one state sponsor of terrorism, the biggest cause of regional instability, and greatest violator of human rights.

They chanted “Zarif is a terrorist”, “Kick Javad Zarif out”, and “No to appeasement; Yes to Resistance”.

These protesters have a point. In 2018 alone, Europe expelled or arrested at least six Iranian diplomats, including a sitting Ambassador, for several terror plots that primarily targeted the MEK.

For instance, in June, Iranian diplomat Assadollah Assadi was arrested in Germany for supplying the highly explosive device that two would-be terrorists were going to use to bomb the Free Iran gathering in Paris, attended by 100,000 people and featuring opposition leader Maryam Rajavi.

Assadi is currently detained in Belgium awaiting his trial for terrorism.

The MEK protesters in Munich urged Europe, as well as the rest of the world, to close Iran’s embassies, expel agents from Iran’s Ministry of Intelligence (MOIS) and terrorist Quds Force, and place the MOIS and Revolutionary Guards (IRGC) on their terror watch lists.

Protesters also advised that Zarif, through his role on Iran’s Supreme National Security Council, which plots the Regime’s foreign terrorist activities, is actively involved in terrorism and its cover-up.

The MEK wrote in a statement: “Playing a role in all of the regime’s malign measures, Zarif’s presence at the Munich Security Conference is a mockery of the event’s entire agenda.”

In 2014, he earned condemnation from the US National Security Council for laying a wreath on the grave of terrorist Imad Mughniyeh, a Hezbollah military commander
And lest anyone gets confused and think that Zarif is a moderate, as he is so often painted by Western media, he told Iran’s Parliament last November that all members of the Hassan Rouhani government take their orders directly from Supreme Leader Ali Khamenei.

He said: “We are not a system in which people can act on their own … We cannot do anything in this country without having to report it. … It is not true that we acted against the will of the Supreme Leader.”

The protesters insisted that the Munich Security Conference hold Iran responsible for its terror campaigns and urged the international community to recognise the Iranian people’s right to rise up against the Regime and overthrow the mullahs.

The protesters also held posters of Rajavi with the text “Democracy, freedom with Maryam Rajavi”.

British firm slapped with bigger US fine over Iran deal

AFP: A British aviation company must pay a total...