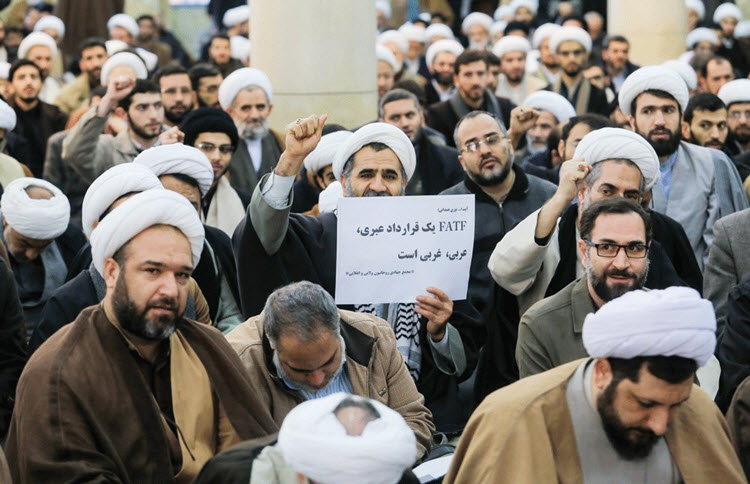 A powerful Iranian cleric close to Supreme Leader Ali Khamenei publically opposed any attempt to pass the Financial Action Task Force (FATF) bills, which are needed in order to avoid being blacklisted by the global anti-money laundering and anti-terrorist financing body.

Mesbahi-Moghadam, a member of the Expediency Discernment Council that refused to pass the bills already approved by the parliament, continued: “This wouldn’t be wrong if there were no sanctions, but at a time when sanctions are put in place, first of all, the dignified parliament has passed two bills for terrorism financing and money-laundering, the Guardian Council had reservations and the [Expediency] Council amended and approved it.”

In February, after Iran failed to meet their last FATF deadline for passing the bills, FATF gave them one final extension until June. If Iran fails to pass the FATF bills by then, FATF will “require increased supervisory examination for branches and subsidiaries of financial institutions based in Iran” and sanctions will snap back.

Mesbahi-Moghadam argued that Iran already has two internal laws regarding financial transparency and these FATF bills are exactly the same, so why would FATF want to add more?

Mesbahi-Moghadam snapped that Iran’s laws were “none of [the international community’s] business” and said that the only reason to pass these bills would be to “shut other people’s mouths” because they provide “no advantage” to Iran.

Of course, one might argue that if these bills are exactly the same as the ones Iran had already passed, then why would Iran not pass them in order to maintain FATF membership and benefit from Europe’s special financial mechanism to evade US sanctions and maintain trade with Europe, China, and Russia, among others.

The so-called moderates want these bills passed in order to maintain trade and, hopefully, pull Iran out of its economic crisis. The so-called hardliners are concerned that this will prevent the mullahs from exporting the “revolution” across the Middle East through terrorist proxies, something that will lead to their demise.

Mesbahi-Moghadam said: “Under severe US sanctions, is it in the interest of the government and the Iranian people to reveal and make transparent our foreign exchanges… The current president of FATF is the United States. Mr Marshall Billingslea is the holder of this post. This is the same person who was and is responsible for Iran’s sanctions in the US Treasury. He is waiting for Iran to join this convention, so he gets the necessary leverage to contain Iran’s exchanges.”

In the end, FATF has turned into yet another thing that divides the factions in Iran, thus showing how weak the dictatorship truly is.

Freed US hiker meets with president of Iran