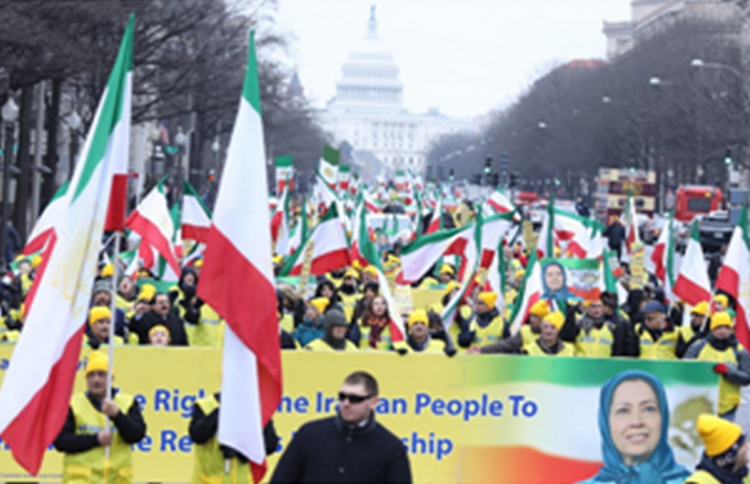 Several thousand members of the Iranian Diaspora and supporters of the People’s Mojahedin (Mujahedin-e Khalq or MEK) will march on Washington, DC, on Friday, June 21, to urge the US government to recognise the Iranian people’s call for regime change in their country and to show support for the democratic Iranian opposition movement led by Maryam Rajavi.

The rally, which comes at the height of worsening tensions between Iran and the US, will show solidarity with the ongoing anti-regime protests in Iran that have continued since December 2017 in spite of a massive crackdown by the authorities that saw at least 7,000 protesters imprisoned last year, according to Amnesty International.

These protests, which spread to at least 160 towns and cities, sometimes to the form of strikes or marches or demonstrations, have been accompanied by Iranians chanting anti-regime slogans, including “Down with Khamenei”, “Down with dictator”, “Reformers, Hardlines, your game is now over”, and “Our enemy is right here, the mullahs lie when they say its America”, and holding up signs supporting Rajavi and the main opposition group Mujahedin-e Khalq (MEK).

The Organisation of Iranian American Communities wrote: “The irreformable religious dictatorship in Iran has waged a four-decade war against the people of Iran and the region. Ousting this regime is the necessary first step to realize an Iran in peace with its people and the outside world.”

This protest will also uphold the achievements of the MEK’s Resistance Units inside Iran, which has achieved much in terms of hitting back against the mullahs, providing a democratic alternative, and getting the support of the international community, organisers say.

They point out that in comparison to the current Iranian regime, the National Council of Resistance of Iran (NCRI), which is the political body of the Iranian Resistance and serves as a parliament-in-exile, offers a well-organized, stable, dedicated, strong, visionary, and democratic government.

The Washington rally will begin at 10:30 am local time on Friday outside the US Department of State on the corner of 22nd Street and Constitution Avenue, where speeches will be given before the protesters march on the White House. OIAC has published more information about the rally on its website.

This rally comes just six days after a similar protest by MEK supporters in Brussels, where Rajavi told a crowd of thousands that the people wanted the regime removed and the “mullahs” were terrified of the very real possibility of that happening soon.

Rajavi said: “[The Iranian people] want the downfall of the entirety of the regime, crying out for regime change. If anyone can change the behaviour of the religious fascists and clerical dictators of Iran without trampling on Iranians human rights and their right to determine their destiny, then, by all means, we welcome it and say go ahead and change this regime’s behaviour as much as you can.”

UPI: The international community should act to prevent a...