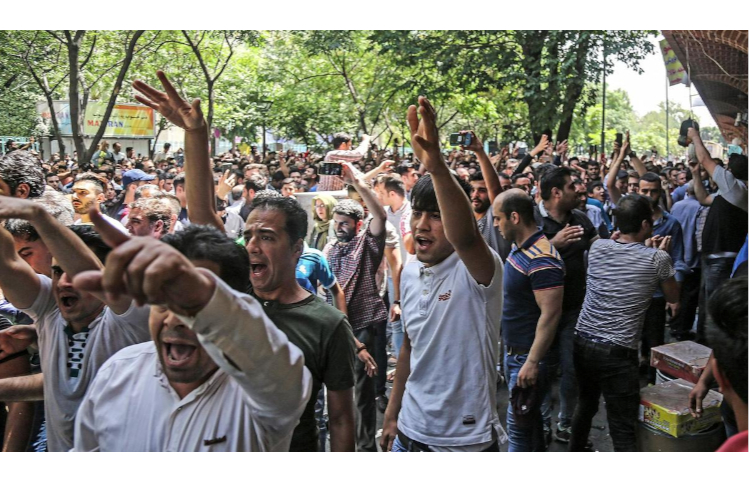 Iran has seen rallies across the country from various sectors of society in recent weeks, which we will look at now.

On Tuesday, clients of the Caspian credit firm, which is affiliated with the Islamic Revolutionary Guards Corps (IRGC), rallied in Mashhad to demand the return of their money. The protesters turned up even though the state police put in place measures to prevent the rally.

Also on Tuesday, storeowners in Tehran’s Aladdin shopping complex went on strike and closed their shops, despite being threatened with the revocation of their working permits, fines, and having electricity in their store cut off.

Meanwhile, in Shush, employees of the Haft Tapeh Sugar Cane Company held their ninth consecutive day of strike action outside the company manager’s office, despite threats to their safety by Iranian authorities, in support of the 20 workers who were recently fired.

One worker said: “Hail to all of you who have shown up here… On Monday, they forced me to write a commitment saying I will no longer participate in these protests. However, in my reports, I specifically wrote I will continue supporting the workers even if the price is my head, as long as my tongue speaks and as long as I breathe.”

Elsewhere, municipality workers in Sisakht, Kohgiluyeh and Boyer Ahmed Province, held their 11th consecutive day of strike action for their nine-month delayed paychecks, despite threats of arrest from government officials.

In a video that went viral on social media, an old woman criticized the Iranian authorities for wasting the country’s money on their warmongering.

She said: “I am Yemen! I am Syria! It’s not my business that they’re hungry! My child is hungry! Our people are hungry! Khamenei, your time has expired. Go! We’re hungry!”

It should be noted that, in contrast to democratic countries, workers in Iran are systematically denied their basic rights, with contract workers excluded from Labour Law protections and only 4% of Iranians enjoying job security, which is less than half the rate of the country with the worst conditions in Europe: Croatia.

Over 90% of workers in Iran (12.6 million) have no job security, while over 3.5 million workers are not registered anywhere and have no rights. When factoring in their families, this means that at least 40 million Iranians have no guaranteed livelihood.

Worse still, the base monthly salary for workers is about $125, according to the 2019 budget, while the poverty line is $580. This means that the monthly salary will last for just six days. No wonder that over half the country lives in poverty.

Reuters: Iran is reviewing its crude output but no...

The Hill: Unspeakable torture and a high possibility of...