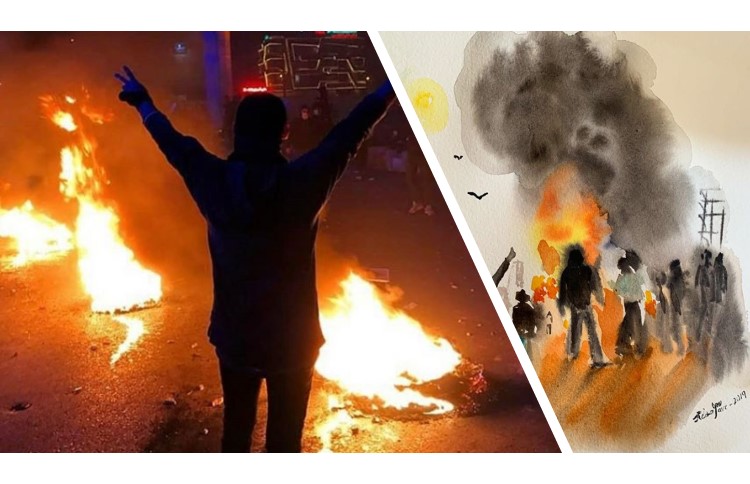 Ali Shamkhani, secretary of the Supreme National Security Council (SNSC) of the Iranian regime, presented documents at the inaugural session of the regime’s parliament on Sunday morning, 17 November, about the role of the Mojahedin Khalq (MEK/PMOI) in the uprisings of 15-16 November.

Government media quoted Ahmad Amirabadi Farahani, a member of the parliament’s leadership delegation, as saying: Shamkhani cited documents and evidence that in the past two days, the Mojahedin Khalq (MEK) was involved in the turbulences.

He added: Shamkhani pointed to documents that during the last two days, organized groups including the [MEK] attacked law enforcement agencies, sometimes possessing firearms and these people’s destroyed banks and public and private properties.

Mohammad Ali Pourmokhtar, another member of the regime’s parliament, said in his report that Ali Shamkhani said in a report last night that members of the SNSC believe sanctions by the enemy target people’s livelihoods. The SNSC supports the decision of hiking the gasoline price to allocate resources from rising gas prices to vulnerable groups, by the Coordination Council of the Three Branches, he said.

He said about the results of the inaugural meeting: ‘The participants in the meeting, including the heads of the three branches and other participants, decided to implement the plan to raise the price of gasoline as we see it today … And all plans for a return to the previous gas prices have already been scrapped and removed from the parliament’s agenda.

Many members of parliament from various government factions, including Mojtaba Zolnour, the head of the parliament’s Commission for National Security and Foreign Policy, supported the plan to abolish the parliamentary plan to decrease the gasoline price.

A spokesman for the so-called reformist faction said: ‘The faction’s plan to cancel the gradual rise in gas prices and its single rate was dropped due to Iran’s supreme leader Ali Khamenei’s Sunday morning affirmations. He also said that the plan to single-rate gasoline at the rate of 15000 rials was dropped due to Khamenei’s emphasis.

Sunday’s public session of the regime’s parliament, which came after the spike in gasoline prices, was tense, and lawmakers repeatedly warned of the explosive situation in the society.

Lawmaker Hussein Maghsoudi said on 17 November: “We MPs in Parliament these days hear the voices of people protesting on the streets, especially in the suburbs and in the south of the city. People know that the deputies had no information about the increase in gas prices and we have not adopted any laws in this regard.”

“People should know that the legislature’s decision to raise gas prices is against the law and the budget approved for 2019.”

Lawmaker Mohammad Damadi said on 17 November: “God forbid that people’s table shrinks. God forbid that a pensioner who receives a 1.2 million-toman pension has trouble with his food basket. The motorized taxis are the educated of unemployed young people in this country, God forbid that they get problems. Be careful Head of State, be careful, God forbid if you can’t manage well, you will have spent from all the country.”

Ayn-Allah Sharifpour, 17 November: “Separate yourself dear people from those who want to disrupt the public order. Criticizing is the right of every member of the society, but not the destruction of the waste of public property.”

Lawmaker Mohamad Kazemi said on 17 November: “People should know that the Parliament had no contribution in deciding to increase gasoline price. The rise in gas prices should have been on a gentle slope, not a 300 percent increase.”

U.S. in no position to attack Iran-Iran minister

Reuters: The United States is in no position to...

US pressures China on Iran sanctions

AFP: US Secretary of State Hillary Clinton on Friday...