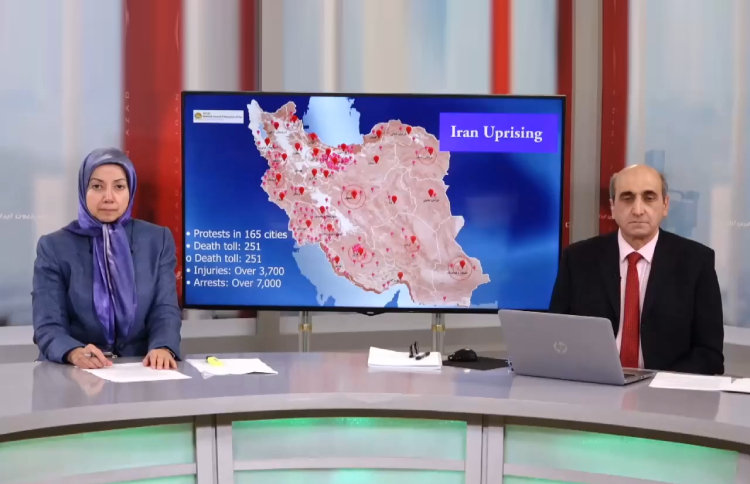 On Friday, November 22, 2019, at 3:00 p.m. CET, the National Council of Resistance of Iran (NCRI)’s representatives held an online press conference about the recent protests in Iran titled, “Iran Uprising: Latest Developments and Reports.” The representative of the NCRI in the UK Ms. Dowlat Nowruzi and member of the NCRI foreign affairs committee Mr. Shahin Qobadi presented a picture of the current situation inside Iran.

Ms. Nowruzi provided the latest information and overall general picture that the NCRI ascertained from inside the country, saying, “The protests began on November 15 and very rapidly spread throughout various parts of Iran. The regime engaged in a bloody suppression and completely blocked the internet on November 17 to prevent the news on the scale of the protests and the scope of its brutal crackdown to reach out to the outside world.”
Ms. Nowruzi explained the continuous protests and clashes in different cities and towns in Iran. She emphasized that despite the Iranian authorities’ claims the people still continue the demonstrations in various parts of the country. The representative of the NCRI in the UK pointed to the government tactic to shut down the internet for employing brutal crackdown on protesters.

The #IranProtests began on Nov15 &spread with stunning speed. The regime engaged in a bloody suppression and completely blocked the #internet on Nov17 to prevent the news on the scale of the #protests and the scope of its brutal crackdown.#FreeIran #Internet4Iran pic.twitter.com/2H5fB3unjC

“Contrary to the claims by the regime, despite the massive crackdown, protests and clashes are continuing in different parts of the country. In many cities, the people have repelled the IRGC’s onslaught and forced them into retreat. One obvious reason for this is that after eight days, the regime is still terrified of restoring the internet.
“Popular anger on one hand and on the other hand the regime’s inability to control the situation is ongoing. The regime is terrified of the [uprising] to go on again,” Ms. Nowruzi highlighted, adding that the regime has still not restored access to the internet after eight days.
During recent uprisings, the People’s Mojahedin Organization of Iran (PMOI/MEK)’s domestic network played a crucial role in gathering information about what is happening inside Iran. Of course, because of the internet blackout, the actual figures are much higher. But some of the statistics provided by PMOI/MEK are as follows:
– Protests occurred in 165 cities.
– At least 251 have been killed. The MEK has identified 85 victims. Most were shot in the head and the chest by snipers. Some as young as 13 are among them.
– 3,700 have been wounded.
– 7,000 have been arrested. Fars News agency reported on the first day of the protests that 1,000 had been arrested.
According to eyewitness reports, the government had mobilized all its suppressive forces, including the IRGC, the paramilitary Bassij, the Intelligence Ministry and plainclothes agents.
In Shiraz, Mahshahr, and Kermanshah, the regime utilized tanks and armored personnel carriers. In Shiraz, it also fired on the crowd from helicopters, according to popular reports.
The people also demonstrate their anger against the regime in its entirety by assaulting and torching the regime’s centers, including those affiliated with the IRGC and Bassij and other regime institutions. “Regime officials and state-controlled media acknowledged that hundreds of IRGC centers, offices of Friday prayer leaders, Khamenei’s representatives and other suppressive agencies. IRGC Brig. Gen. Abdollah Ganji admitted, ‘The epicenter of the attacks demonstrated the level of violence and targeted rebellion,’” Ms. Nowruzi added.

#Live Conf: Contrary to the claims by regime& despite the massive crackdown,#IranProtests are continuing all over the country. The ppl have repelled the #IRGC’s onslaught &forced them into retreat. One obvious reason 4this is that after 8days, Internet is still shut.#FreeIran pic.twitter.com/f4URc5mdgv

The representative of the NCRI in the UK Ms. Dowlat Nowruzi continued by explaining the new characteristics of the nationwide uprising of the Iranian people. “Despite the regime’s readiness to any potential reaction to the gasoline price hike, it failed to stop the spread of the uprising,” Ms. Nowruzi said. She also listed the characteristics of the new uprisings as follows:
– This shows that the balance of power between the people and the Iranian Resistance is shifting.
– While the uprising was prompted by the gasoline price hike, it quickly morphed into a nationwide and popular uprising.
– The slogans were from the very beginning political and directed at rejecting the entirety of the regime. The most prevalent slogans were “death to the dictator,” “Death to Rouhani,” “Death to Khamenei,” “leave Syria alone, think of us,” “neither Gaza nor Lebanon, my life for Iran.” The slogans reflected what the MEK has been saying for many, many years.
– The speed with which the uprising spread was unprecedented. People’s anger was entirely directed at government agencies and institutions, particularly agencies affiliated with the IRGC and Khamenei’s office. The IRGC-affiliated newspaper wrote that the uprising had been organized and that the “rioters had been trained.” Those involved in the uprising were tasked with “attacking sensitive military and law-enforcement centers,” it wrote.
Ms. Nowruzi followed by highlighting, “The uprising had a dual characteristic. All the impoverished sectors were involved. It was also well-organized. Regime officials repeatedly acknowledged the role of MEK’s Resistance units in the uprising.”
Mr. Shahin Qobadi, a member of the NCRI’s foreign affairs committee, continued by listing some samples of admissions by the most senior officials of the regime to the decisive role of the MEK in the uprising. “On November 17, Khamenei defended the decision by the regime to raise gas prices and ordered the security forces to take matters in their own hands. He said the MEK was responsible for the protests.
“Ali Shamkhani, the secretary for the Supreme National Security Council, told the Majlis closed-door session, ‘A number of people who were provoking the people in the streets were identified. It was determined that they had links to the MEK.’ (Qods Online, November 17, 2019).
“The commander of the State Security Force, Hossein Ashtari, told the regime’s state TV on November 17: ‘Our assessments show that counterrevolutionary and the MEK are guiding the activities.’
“The head of the paramilitary force said, ‘Unrest on Saturday evening was carried out by centers of chaos. The MEK has cells in our country.”
“Commander of the IRGC in Fars Province, Ghiasi, told IRNA on November 19, “Organizers of the protests in Fars Province were affiliated to the MEK.” Mr. Qobadi said.
Shahin Qobadi also explained prospects for the uprisings’ future and said that the uprising showed that a page has turned in Iran. This is the beginning of the end for the regime. Recall that developments in Iraq and Lebanon were strategic blows to the regime.
“The protests clearly showed the murderous and barbaric nature of the regime and showed there is no welcome to the repressed people when they are resorting to violence and there is no difference between the various factions of this regime and it clarified that [Hassan] Rouhani put aside his moderate posturing when he directly called for total crackdown,” Mr. Qobadi underlined.
The NCRI’s member of the foreign affairs committee also said that the qualitative change is the depth and “the expansion of the activities by the Resistance Units of the MEK”, especially in the past two years, which had deeply influenced the young people. In other words, the force seeking the overthrow of the regime has established its links with the people and now the overthrow of the entirety of the regime has turned into the demand by the population.
In conclusion, as it pertained to what should be done, as the President-elect of the NCRI Mme. Maryam Rajavi pointed out:
1. World governments and the international community must set aside all considerations and reservations about the regime. They should demand an immediate halt to the killings and arrests. If the regime does not comply, they must readily pull the trigger of UN Security Council sanctions.
2. The UNSC must declare the regime’s leaders as criminals committing crimes against humanity. They must face justice for this massive suppression and bloodshed.
3. The international community must strongly condemn the mullahs’ terrorism on the internet and assist the people of Iran in circumventing this inhumane blockade.
4. The regime is using all its ploys to hide the actual number of the martyrs. The United Nations must send investigative missions to document the martyrs, the wounded and the prisoners.