Iran: The Uprising, Internet, and the Government’s Greater Worries 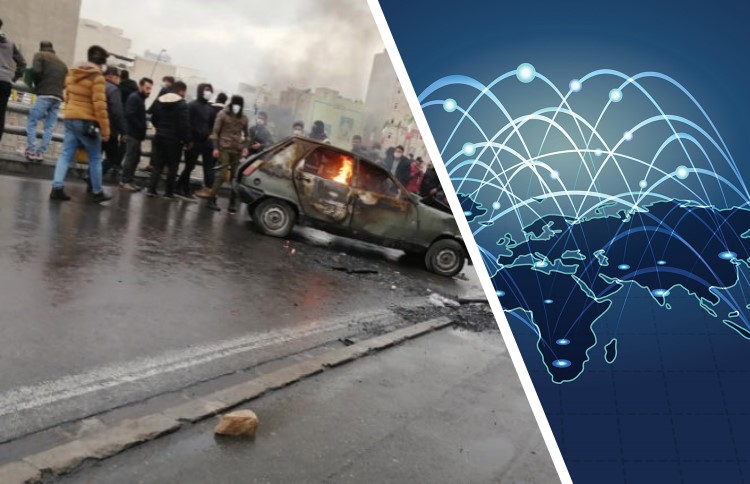 The experience of the 2018 uprising in Iran had shown that when the fire of outrage, public hatred against Iran’s oppressive clerical system and calls for its overthrow arise, these would quickly ignite the whole country.

It was therefore clear that the regime would take whatever action was necessary to counter the spread of the uprising to other cities, but this time the huge explosive potential in society and the unprecedented expansion of the uprising from the very first hours have involved more than a dozen cities. The regime was so surprised and terrified that in order to cut off the protesters’ communications with one another, it quickly cut off the Internet and disrupted the public communications system to block them.

We have not forgotten that the Iranian President Hassan Rouhani had criticized internet and social filtering last month: ‘The Minister of Communications should not go to the filter button.”

When it comes to saving the regime, the regime officials are united in repressing freedoms, including freedom of information.

The most complex Internet shutdown:

Alp Toker, the technician, and director of Netblocks, a US-based internet watchdog organization, called the Internet disconnection in Iran the most complex network outage and wrote in his tweet on 16 November:

“With over 300 networks disrupted, Iran’s internet shutdown is one of the most complex we’ve ever tracked.

Simply switching it off took ~24 hours National connectivity now hovers at 5% with a few pockets of connectivity remaining to the outside world.”

On the same day, NetBlocks tweeted, referring to the Internet’s disruption:

If we look at the extent of the damage caused by the disconnection of the Internet, then we can see the depth of the regime’s fear of an uprising.

The Azeri Student Movement site reported on 18 November, quoting NetBlock that: “Iran’s Internet shutdown costs about $ 375 million for the Iranian government every day.”

In a response to a reporter, the regime’s communications minister, Mohammad Javad Azari Jahromi, said: “Certainly, this disruption of services has hit businesses and the people too, but the country’s security, recognized by the Security Council, is very important. (state-run news agency ISNA, 18 November)

Internet or a security subject:

In most democratic countries, governments provide many facilities for people to have easier and better access to the internet, to use it for the advancement of the country.

But in Iran, this government would have essentially prevented the spread of the Internet if the requirements of both administrative, economic, and commercial means permitted them.

The Iranian government has never denied that the Internet is essentially a security issue. Remembering that they, from the very beginning of the Internet, had started with hostility toward the internet, hysterically restricting and intimidating and suppressing it to keep it out of the reach of the general public, especially the youth.

Therefore, most of the Iranian supreme leader Ali Khamenei’s representatives at Friday’s prayers, with slogans like “spreading of corruption”, warned the public of using the Internet.

Ahmad Alam Al-Hoda expressed his horror about the cyberspace at Friday’s praying in Mashhad on 25 January 2019: “This cyberspace and these social networks anger everyone.”

On the same day, Hamid Shahriari, the head of the Center for Judicial Statistics and Information Technology, who addressed a Friday sermon in Tehran, emphasized the need to control the cyberspace and said: “We say cyberspace must be managed. Proper filtering must be executed by government officials.”

Ali Rabiei, the spokesman for the Iranian government, added: “When there is a guarantee that the internet will not be misused, in some provinces it will gradually come back … We know that people are facing problems … but a greater concern in the current situation is to preserve the peace and stability of the country.”

Iran Said to Admit Tests on Path to Atom Arms

New York Times: Iran has admitted that it conducted...