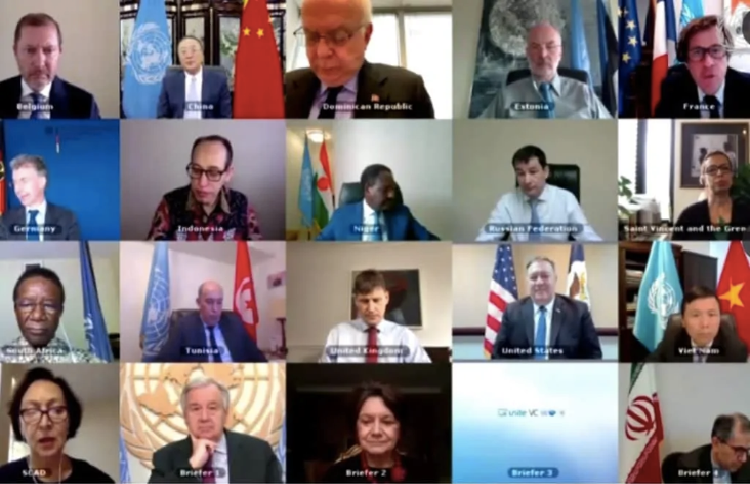 On June 30, the United Nations Security Council (UNSC) convened for a meeting to present a six-month report on the implementation of UNSC Resolution 2231.

Notably, the resolution is considered the base of the Iran 2015 nuclear deal, formally known as the Joint Comprehensive Plan of Action (JCPOA).

In October, the council will hold another meeting to make a final decision on the arms embargo on Iran, which was put in place in 2015 for five years as part of the JCPOA. However, in a draft resolution, the United States urged the Council to consider discussing the extension of the arms embargo on its agenda.

In its proposed resolution, the United States called on UNSC members for sanctions to remain in place, leading to ban Iran from shipping, selling, and supplying any weapons or components. According to the draft, all ships bound for Iran will be inspected.

In his speech at the meeting, U.S. Secretary of State Mike Pompeo called on the UNSC to reject Iran’s “extortion diplomacy” and extend the UN arms embargo against Tehran, scheduled to expire in October. He called the Iranian clerical government “the most heinous terrorist regime in the world” and reckoned Iran-backed terror activities, including missile attacks on Saudi Arabia and shipping arms cargoes to Yemen in November 2019 and January 2020, as flagrant violations of UNSC Resolution 2231.

“Iran is already violating the arms embargo, even before its expiration date. Imagine if Iranian activity was sanctioned, authorized by this group if the restrictions were lifted,” the State Department website published Pompeo remarks on June 30.

“Iran will be free to purchase new and advanced technologies for its proxies and partners throughout the Middle East, including Hamas, Hizballah, and the Houthis… Iran will be free to become a rogue weapon’s dealer, supplying arms to fuel conflicts from Venezuela, to Syria, to the far reaches of Afghanistan,” he warned UNSC members about the consequences of lifting sanctions.

Also, representatives of European countries implicitly announced their support of the United States’ plan for a permanent arms embargo on the Iranian government. However, they did not cover-up their passion for preserving the JCPOA.

“The human rights situation in Iran is appalling. Human rights activists are persecuted. There are political prisoners. There is no press freedom, no right of assembly, and there is aggressive foreign policy meddling in the region,” German Ambassador Christoph Heusgen said at the beginning of the UNSC VTC meeting on non-proliferation, on June 30.

Amb. Heusgen also addressed Iran’s violation of the JCPOA and said, “Because of these steps away from the agreement by Iran, the E3 has invoked the dispute resolution mechanism, a measure within the framework of the JCPOA.”

Germany’s representative expressed his country’s concerns over Iran’s missile programs, describing non-compliance with the UNSC resolution 2231. “On the Conventional Arms Embargo, we share the concerns on the implications of the expiration of these limitations. On the other hand, we remind that the sanctions on the Missile Technology Control Regime (MTCR)-listed items will remain in place, and the transfer of arms by Iran to non-state actors will remain prohibited according to other UN Security Council resolutions,” Amb. Heusgen added.

Afterward, representatives of the United Kingdom and France declared their support for Germany’s position. “We are concerned about Iran’s activities regarding unconventional weapons, and they should be stopped, and we condemned them,” said France’s representative Nicolas de Rivière.

Britain’s representative at the UN Jonathan Allen announced that his country pursues preventing Iran from developing a nuclear weapon in line with the collective security interests of the international community. Amb. Allen said that in 2020, the world “has seen a continuation of Iran’s destabilizing activity around the Middle East, including activities which are inconsistent with UNSCR 2231 and other resolutions.”

In this respect, Britain’s representative explained, “Iran’s ballistic missile technologies pose a threat to regional security,” adding, “We believe that the planned lifting of arms restrictions on Iran in October would have major implications for regional security and stability. We are committed to working with JCPOA partners and Security Council members to address these concerns.”

Therefore, the E3 foreign ministers showed their agreement with the United States’ desire to extend the Iran arms embargo.

Additionally, desperate remarks of the Iranian Foreign Minister Mohammad Javad Zarif displayed his government’s failure in creating a rift between Europe and the United States. “Several European members of the UNSC are planning for further destruction of the resolution and the council, while not adhering to their commitments to the JCPOA,” Zarif said.

Then, the Iranian foreign minister slammed the latest report of the UNSC about Iran’s violations of the JCPOA while he styled his government as a “respecter of the rule of law.” “Recently, they have forced the UNSC Secretariat to produce a completely unprofessional report outside the scope of its authority under Resolution 2231 relying on self-made claims and forged documents,” Zarif added.

The Groundwork for Tightening the Noose on the Iranian Government

Evidence shows that the Islamic Republic’s allies Russia and China will probably object to the extension of the arms embargo on Iran and may use their veto power in the advantage of the ayatollahs. However, the June 30 session has likely paved the ground for a more serious discussion in October.

Furthermore, Russia and China will automatically be obligated to take the most robust steps against Iran’s aggressive behavior in return for Europe’s concessions to avoid extending embargos. In this case, Iran’s allies at the UNSC would acquiesce to E3 states in triggering the dispute mechanism against Tehran, which will further corner the Islamic Republic.

The best red line for a nuclear Iran

Washington Post: As the great powers contemplate a solution...