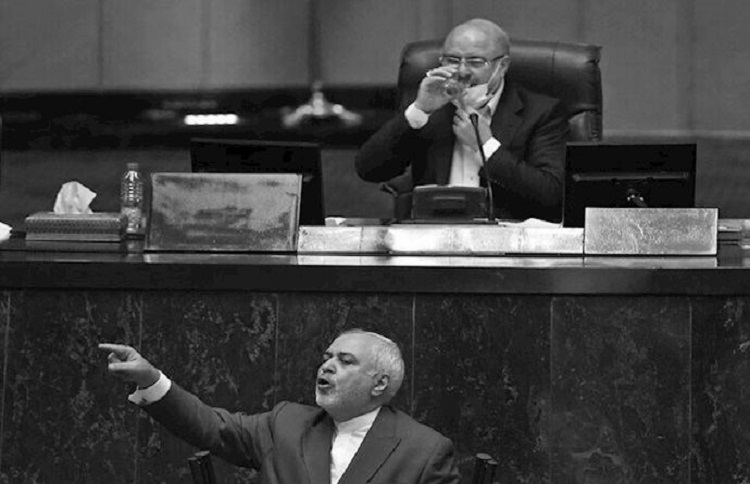 Last week Iran’s parliament was the scene of an outcry. On one side stood foreign minister Mohamad Javad Zarif who tried to defend himself and his government’s foreign policies mainly on the nuclear case and the JCPOA.

On the other side were the MPs who accepted none of that. They just yelled at him over all the government’s defeats in its foreign policies and its economic situation, without considering that they all are “on the same ship” as Zarif told them. This means that if the regime drowns, they will drown all together, and it makes no difference in which faction they are in.

In between all the outcries, Zarif said: “Foreign policy is not a matter of factional dispute.” He added: “That is why foreign policy is within the general goals of the system in the hands of the leadership to avoid dualization and factionalism.”

With this, he confessed that he is just Supreme Leader Ali Khamenei’s puppet in the international tribune and follows the policies dictated by Khamenei. In other words, everything about the regime’s terrorism and the “Iran selling” is in the hands and on the orders of Khamenei. As one of the regime’s high clerics, Mohammad Mousavi Khoeiniha in a letter to him showed this reality when he said: “Managers who just come and go”.

What Zarif could not say

What Zarif could not say in that parliament meeting or just said a little part of it and did not stand out in all the cries, was clarified on the next in a meeting between the Senior Foreign Ministry officials with Eshaq Jahangiri, the first vice president of Iran’s President Hassan Rouhani:

“If our relationship with our neighbors is based on good neighborliness, nothing else will help us other than the Caspian Comprehensive Convention. Or our 25-year relationship with China which is actually in our national interest, but unfortunately, we see lies in these matters. In relation to China today, both the radical, reformist, and counter-revolutionary factions are working hard against it. On the JCPOA they did the same thing, they made a political satire of diplomacy and buried it and did not understand what they have done.” (Hamshahri Online, 6 July)

Selling off Iran via contracts

If we declare this paragraph a little, we will have the following:

Many topics are being negotiated

“Basically, the foreign policy subjects are not the subjects, that all of its issues should be discussed in the public. Not that we have something to hide from the people, but because many things are on the negotiation table, for example, the issue of the Caspian Convention, Iran is negotiating about the Baseline (sea), and if we explain about this subject we give the counterparty freehand, while the counterparty is not informed about our minimum and maximum in that negotiations. Or about the 25-year document with China, our negotiations have just begun.”

The translation of this paragraph is very simple: “Iran selling” is going for a long time.

In the continuation of the story, suddenly the foreign minister reveals another thing, the secret oil sales to Russia. He calmly says that there have been secret talks with Russia on oil sales in the days of sanctions:

“One of the MPs said why don’t you allow the MPs in your meetings. Coincidentally, the same brother was present at the negotiations between me and Putin, and then he said that Russia was going to buy oil from us. That is why Russia stopped buying Iranian oil. Because everywhere the Russian tried to buy oil from us the US prevented it. While it could have been treated differently, and the same is true about China and the JCPOA. This is a problem that we have in the foreign policy and no one is helping us.”

This was so biting and treacherously that even the state media took a stand. Mostaghel daily on 7 July wrote:

“They [the members of the Parliament] were so hot that they did not understand that Zarif implicitly said that they had sold Kish (island) and that when it was finalized, they were going to bring this treaty and put its clauses in the eyes and hearts of the people. Without asking them for an opinion now.

“Or where he said that foreign policy is trans-factional and in the realm of the Supreme Leader’s authority, which means, that the government has no role in the JCPOA, in negotiations, in sanctions, and that it is not the government’s job at all to make decisions.

“Therefore, the consequences of these decisions are not the responsibility of them, which means that ascribing ‘betrayal’ to Zarif, is because they have lost their way. But all of them poor people are just noobs and are just at the beginning to understand the affairs, and why the ninth Parliament, had approved the JCPOA in just 20 minutes.”

“They say the parliament is a place to shout. Yes, Mossadegh shouted in parliament when he nationalized the plundered oil of the country. Modarres shouted to break Reza Shah’s dictatorship back. I wonder why did they have shouted? Wanted to remove the stigma of selling the homeland to China in exchange for a veto or wanted to renew the laws for the rights of the Rominas? Or did they protest against the daily destruction of the country’s military wealth?”

This reveals that the government’s “Iran selling” has no end, and every day we are facing new masterpieces.

Iran fails in bid to claim artefacts from UK

Press Association: As the diplomatic crisis over Iran's capture...

FACTBOX-Foreign companies stepping away from Iran