Rajavi: Democracy and regime change in Iran is key to crisis in Middle East 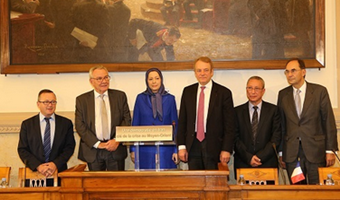 Maryam Rajavi, president elect of the National Council of Resistance of Iran, Addressed a conference on Tuesday, 27 October, at the National Assembly of France.

Rajavi asserted that the systematic and flagrant violations of human rights in Iran is the other side of the coin marked by the Iranian regime’s export of terrorism and fundamentalism which has driven the Middle East to the verge of war. The Middle East needs peace and tranquility and this is only possible by regime change in Iran and its key is in the hands of the Iranian people and Resistance, she proclaimed.

“Any engagement with the ruling religious fascist regime and its president prevents change in Iran and works against democracy and human rights”, Mrs. Rajavi added. Furthermore, it is detrimental to peace and tranquility in the region and fuels extremism. She said: “Economic investment in this faltering regime is only a mirage”.

The conference was sponsored by the Parliamentary Committee for a Democratic Iran headed by Mr. Dominique Lefebvre, member of the French National Assembly.

“The Parliamentary Committee for a Democratic Iran announced at this conference that 70 National Assembly deputies from various parties had issued a declaration calling on the Government of France to make its diplomatic relations with the Iranian regime contingent upon improvement of human rights, halt to executions, freedom of political prisoners and respect for democratic freedoms in Iran. The signatories believe that a democratic Iran is the essential requisite for regional stability and to this end, the Iranian Resistance and the ten-point plan of Maryam Rajavi for a democratic, non-nuclear Iran based on separation of religion and state and women’s equality must be supported.” National Council of Resistance of Iran (NCRI) said in its site.

Maryam Rajavi pointed to recent remarks by Rafsanjani, Iran’s number two official from day one, admitting that the clerical regime launched its nuclear program with the objective of producing a bomb. He said that the project was being followed up personally by himself and by Khamenei. Rafsanjani said the regime had no choice but to accept the nuclear agreement. This is why the mullahs have undertaken a more aggressive policy to compensate for their retreat. The astronomical rise in executions, escalated warmongering in Syria and continued siege and oppression of Iranian refugees in Camp Liberty are examples of this policy.

Rajavi said: “Many in the West think that the mullahs’ belligerence emanates from their power. They thus seek to engage the regime in resolving the crisis in the region that actually they are its prime cause. They overlook the regime’s fundamental weaknesses and fail to notice the elements of change in Iran. If it were not for the mullahs’ all-out support for Assad and Maliki, ISIS could not develop, 300,000 Syrians would not have become victimized and there would not have been a tidal wave of refugees flooding Europe”.

The Iranian Resistance’s President-elect proclaimed: “The policy of turning a blind eye on the regime’s interferences in the region must be ended. The solution to the crisis in Syria is eviction of the Iranian Revolutionary Guards Corps (IRGC) and giving concrete support to the opposition to achieve a Syria without Bashar al-Assad”.

Rajavi called on the international community, particularly the European Union and the United States to fulfill their pledges for the protection of Camp Liberty and termination of its inhumane blockade.

By Pooya Stone The United Nations General Assembly will...