Iran Focus: Ahvaz, Iran, Aug. 19 – On a recent sunny afternoon down south in Iran’s oil heartland, Majid, an engineer in his 30s gives a bleak assessment of his outlook for Iran’s energy industry and the blistering effect of global sanctions on the regime over its controversial nuclear projects. 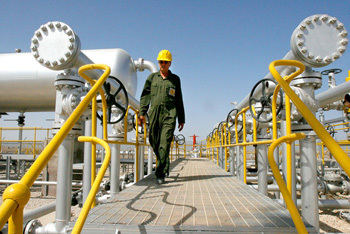 Ahvaz, Iran, Aug. 19 – On a recent sunny afternoon down south in Iran’s oil heartland, Majid, an engineer in his 30s gives a bleak assessment of his outlook for Iran’s energy industry and the blistering effect of global sanctions on the regime over its controversial nuclear projects.

The National Oil Company’s employees in Ahvaz recently had a 30% pay cut as the government struggles to cope with the economic impact of new sanctions.

Majid says many of the oil company’s employees are members of the paramilitary Bassij, an affiliate militia of the Revolutionary Guards, and they did not show much sign of protest over their new wage levels. Similar pay cuts are also planned for oil company employees and civil servants throughout Khuzestan Province and in neighbouring Kohkilouyeh and Boyer Ahmad.

“People are not too optimistic about sanctions, and they are right, because people end up feeling the initial pressure. These sanctions target the heart of the economy. At the same time, people also acknowledge that in the long term, the regime will be the main victim of sanctions”, Majid said, adding that university students and intellectuals know that sanctions will devastate the regime.

“But, the general population does not have a strategic outlook”.

There have been major strikes at the bazaar in Ahvaz is recent weeks, and locals generally believe that it will continue, though Majid doubts that the oil employees will be joining them anytime soon. “At the moment, I don’t see any inclination towards a strike at the National Oil Company, because most of its employees are Bassij elements, and the regime takes care of them”, he said.

“I recently found out that during protests in Ahvaz, the Bassij Force’s elements at the oil company played a direct part in suppressing the uprising and supplying and equipping the paramilitary Bassij forces. In other words, Ahvaz’s oil company backs the Bassij”.

Majid and other locals think the atmosphere would be ripe for an uprising with the start of larger strikes. “People are gradually discovering the inherent power of strikes, and these strikes will be endemic in view of the growing pressure from sanctions and higher gas prices”, Majid said. “Strikes will cripple the Iranian regime. I think they will start any time around the end of September”.

Iran imports at least 40 percent of its gasoline from abroad. Rumours are spreading among locals in Ahvaz that gas prices will soon double to about $0.90 from the current $0.40. “You can imagine what kind of pressure this would impose. And all the while the atmosphere of the uprising or disenchantment can be felt even though it may not be fully evident”, Majid said.

“I have no doubt that the night before the announcement for higher gas prices is supposed to be made, there will be an uprising across the country. People, who sense the regime’s vulnerability, will definitely burn several gas stations when prices increase”.

“These are the things I’ve heard in Shiraz taxi cabs, and I say it because my personal opinion is not any different from the rest of the people, and we, too, are part of the people and support them”.

Majid is a pseudonym for the engineer interviewed by Iran Focus who had requested anonymity for fear of government reprisal for sharing his views.

CNN: Iran and Lebanon's Hezbollah movement are risking their...