Reuters: Twenty-one-year-old Iranian Farnoush has her own job but no longer her own telephone. 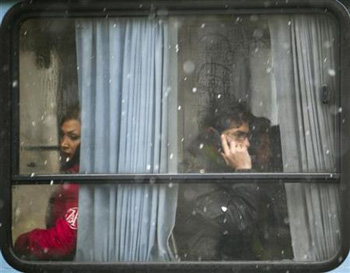 TEHRAN (Reuters) – Twenty-one-year-old Iranian Farnoush has her own job but no longer her own telephone.

When her father looked at her text messages and discovered she had a boyfriend, he confiscated the cell phone, saying her behavior was not proper in an Islamic republic.

“You have no idea. It’s the worst feeling, the pressure, when your father finds out you have a boyfriend,” Farnoush said, while plucking a customer’s eyebrows at a Tehran salon.

Iran is governed by a version of sharia law which in theory prohibits any mingling between members of the opposite sex outside marriage or close family. While social rules were relaxed under reformist former President Mohammad Khatami, who was first elected in 1997, things have tightened up again since Mahmoud Ahmadinejad succeeded him in 2005.

With reformists sidelined after protests against Ahmadinejad’s disputed 2009 re-election were crushed, parliamentary elections next March may end up being contested only by various factions on the right, leaving little hope for social liberalization anytime soon.

“If it is not one thing, it is another,” he said. “If not a raid on a party you’re at, it is having to answer about your hairstyle or the ornament worn around your neck.”

Seventy percent of Iran’s population is under 30 and has no real memory of the 1979 Islamic revolution.

Nima, Farnoush and millions of other modern, young Iranian urbanites can easily get around government restrictions on the Internet and satellite television.

But once they’ve watched the Western movies and TV shows, they have to find a middle way of living between the social freedoms they see there and the strict prescriptions from the mosque and state in Iran.

While the demand from many young Iranians for greater social freedoms is palpable, many voices in the media, politics and the clergy are calling for norms to be tightened.

A recent article on the conservative Fars news agency debated whether boys and girls should even be allowed to talk to each other on the telephone.

“If the aim of this conversation is resolving school issues or a planned marriage in the future, it would not pose any problem from religious viewpoint,” it said.

“However, if there is a strong probability that the continued conversation would cause one or both of the speakers to fall into the trap of affection, the act would not be religiously authorized.”

“Is the shape of our children’s hair style really the Iranian public’s concern? The youth have the right to have any hair style they want to. What does it have to do with us?” he said before his first presidential election win in 2005.

Since then, Ahmadinejad has come out against a move to segregate men from women in university classes, and has often said policing the Islamic dress code should not be a priority — comments which have angered more conservative elements who accuse him of undermining the influence of Iran’s clerics.

Some analysts say Ahmadinejad’s comments were aimed at attracting centrist voters who are uncomfortable with strict conservative policies but not ready to embrace radical change.

“The reality is that Ahmadinejad is not among the most conservative in Iran regarding cultural issues,” said Farideh Farhi, an Iran expert at the University of Hawaii.

“But he either has had to back down on some of his positions in the face of conservative opposition, chosen not to press the issue, or in some instances allowed underlings to push for policies such as gender segregation at the universities.”

Many Iranian youths push the legal limits sometimes to breaking point. Millions go to websites such as Facebook that are blocked by the government but accessible to anyone with some technical knowledge.

The sexes mingle at private parties, keeping one eye out for possible police raids that have occasionally ended in tragedy. A young woman fell to her death from an apartment in Mashhad when trying to escape a police raid on a party where alcohol was being consumed, newspapers reported on September 25.

For Farhi, few Iranians will remember Ahmadinejad’s term in office, which is due to end in 2013, as one of social freedom.

“It is more likely that such relatively ‘liberal’ positions on cultural issues will be seen as deceptive talk by him and his advisers to maintain power.”

Maryam Ansari, a 22-year-old English literature student in Tehran, said social restrictions had made her life “boring and repetitive.”

“My feeling is shared by a lot of other people of my age in that there is not much to do but maybe go to movies, restaurants, watch a lot of (satellite) television,” she said. “And spend a great deal of time speaking on the phone.”