Iran blocks use of tool to get around Internet filter

Reuters: Iranian authorities have blocked the use of most “virtual private networks”, a tool that many Iranians use to get around an extensive government Internet filter, Iranian media quoted an official as saying on Sunday.
By Yeganeh Torbati 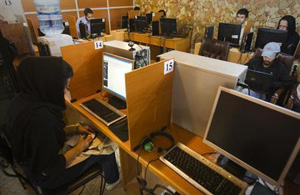 DUBAI (Reuters) – Iranian authorities have blocked the use of most “virtual private networks”, a tool that many Iranians use to get around an extensive government Internet filter, Iranian media quoted an official as saying on Sunday.

A widespread government Internet filter prevents Iranians from accessing many sites on the official grounds they are offensive or criminal.

Many Iranians evade the filter through use of VPN software, which provides encrypted links directly to private networks based abroad, and can allow a computer to behave as if it is based in another country.

“Within the last few days illegal VPN ports in the country have been blocked,” said Ramezanali Sobhani-Fard, the head of parliament’s information and communications technology committee, according to Mehr. “Only legal and registered VPNs can from now on be used.”

Iran is holding a presidential election in June, its first since 2009, when a disputed result led to the worst unrest since the 1979 Islamic revolution.

Protesters used services like Facebook to communicate during those “Green Movement” demonstrations, and the government has taken steps to curb access to the Internet in the last few months, apparently determined to prevent a repeat this time.

An internet user named Mohamad from the Iranian city of Isfahan confirmed that VPNs had been blocked.

“VPNs are cut off. They’ve shut all the ports,” he said in a Facebook message, adding that he was using another form of software to access the service without a VPN. He said Skype and Viber, internet services used to make telephone calls, had also been blocked.

In January, Mehdi Akhavan Behabadi, secretary of Iran’s Supreme Cyberspace Council, told Mehr that Internet users would soon be able to purchase registered VPN connections and that other VPNs were illegal. Financial institutions and other organizations might need to use VPNs for security reasons, which would be a legal use, Behabadi said.

The government’s move to block VPN access may also have inadvertently cut off access to widely used sites such as Yahoo and Google, Sobhani-Fard told Mehr on Sunday, adding that parliament would study the issue more this week.

Amin Sabeti, a UK-based researcher on Iranian media and the web, said foreign companies such as airlines and banks had had problems using VPNs in Iran.

Millions of Iranians experienced disruption to email and Internet access ahead of parliamentary elections last year.

“As the June election approaches … Iran’s Internet connectivity, and the accessibility of uncensored information, continues to deteriorate,” said a report on Iran’s Internet infrastructure published in March by the UK-based group Small Media, which researches Internet use in Iran.

“Prominent Persian-language websites and other online services have been filtered one by one, and communications with external platforms is becoming progressively more difficult.”

Iranian authorities banned Google’s email service for a week last year but reopened access after complaints from officials. They have also announced plans to switch citizens onto a domestic Internet network which would be largely isolated from the World Wide Web.

Trump to Speak on Iran Nuclear Deal and Policy Next Week