AP: Iranians flocked to parks rich with the smell of grilled kebabs on Wednesday to toss around
Frisbees, bat badminton birdies and battle one another in chess and backgammon – all to avoid being caught inside on the unlucky 13th day of the Persian New Year. 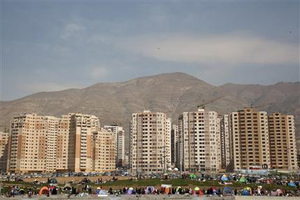 TEHRAN, Iran (AP) — Iranians flocked to parks rich with the smell of grilled kebabs on Wednesday to toss around Frisbees, bat badminton birdies and battle one another in chess and backgammon – all to avoid being caught inside on the unlucky 13th day of the Persian New Year.

The annual public picnic day, called Sizdeh Bedar, which comes from the Farsi words for “thirteen” and “day out,” is a legacy from Iran’s pre-Islamic past that hard-liners in the Islamic Republic never managed to erase from calendars.

Many say it’s bad luck to stay indoors for the holiday.

“I know a family who stayed in and later in the day the leg of their young boy was broken when he fell down the stairs.” said Tehran resident Fatemeh Moshiri, 48.

Iranian hard-liners have tried unsuccessfully for decades to stamp out the festival and other pre-Islamic events, which are seen as closer to Zoroastrianism, the predominant faith of Iranians before Islam.

They have had little success.

“When we go out on Sizdeh Bedar, we take ill-omens out with us,” Tehran resident Marzieh Rahimim, 64, said. “Otherwise a quarrel may happen or an invaluable dish may be broken.”

Last week, Ayatollah Ahmad Khatami, a Friday prayer leader, reiterated a common clerics’ admonition that it is “superstitious” to believe that the 13th day of the new year is unlucky or to think that the popular practice of tying blades of grass together on the day will bring good fortune.

Enjoying nature is commendable, Khatami acknowledged, but he said people should nonetheless keep Islamic values in mind because the festival comes a day before Muslims remember the anniversary of the death of the daughter of Prophet Muhammad.

Islam has been dominant for centuries in Iran, but the country’s Zoroastrian past has left its mark through festivals and traditions still celebrated to this day. The number of practicing Zoroastrians is a tiny minority in today’s Iran, however – around 60,000 people out of a population of more than 76 million.

State media and calendar makers choose to call the festival “Nature Day” instead of Sizdeh Bedar, given the bad-luck associations with the number 13.

Families across the country spread rugs and set up small tents in outdoor areas to mark the holiday, sometimes just a few inches from their neighbors. They have lunch, sip cups of tea and munch on pistachios, fruit and candy.

Iranians also throw trays of sprouted seeds that have been sitting on their new year tables into running water to mark the occasion.

Young and old alike tie blades of grass together in the hope the year will be filled with happiness and prosperity. Young girls usually make wishes to get married as they tie the blades of grass.

“I tied the blades of grass when I was 17,” remembered a smiling Sanam Rezaei, 68, as she sat alongside her husband Abdolali, 75, in a Tehran park. “This man – at that time a young man – approached me there and proposed.”

“This can happen to my grandchildren too,” she added, her eyes on a group of young people nearby. “We’re still in love after half a century.”

Unlike other countries in the Middle East, Iran follows the Persian solar year, which begins on the first day of spring. It is now the year 1393 in Iran, a date calculated from the migration of the Prophet Muhammad from the city of Mecca to Medina in 622 A.D.

People in Afghanistan, Azerbaijan, Iraq and Turkey, as well as other central Asian countries, also celebrate the festival.

Friends and relatives use the Sizdeh Bedar festival as an opportunity to meet up with friends they’ve not seen for some time. It is at the tail-end of the extended celebrations period for the Persian New Year, or Nowruz.

Sizdeh Bedar is one of two festive outdoor pre-Islamic celebrations in Iran. The other one, known as “Chaharshanbe Souri,” is celebrated before Nowruz and involves jumping over bonfires and shooting off fireworks as an opportunity to purify the soul.

Pejman Mousavi, a columnist in the pro-reform Etemad daily newspaper, said Iranians see Sizdeh Bedar as a reason to be happy.

“This ancient celebration is now mainly a pretext for people to be happier,” Mousavi said. “People widely welcome it while there is no official call for it.”

AFP: The wife of a British businessman who is...