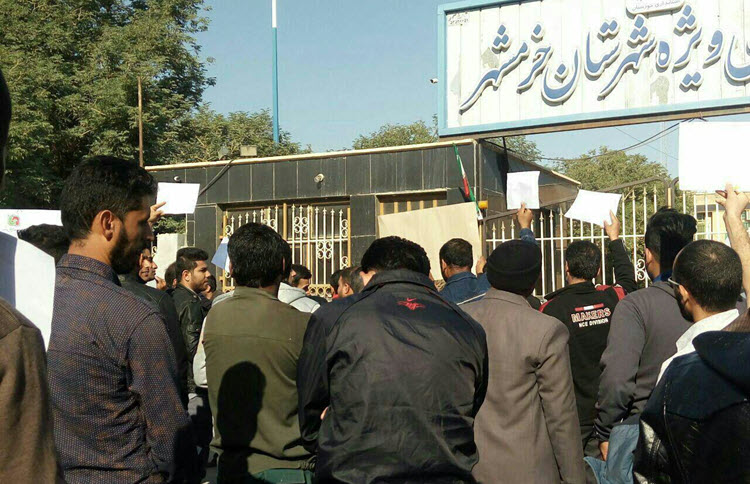 London, 6 July – Last Friday, the purified-water shortage in southwestern Iran saw the staging of one of the largest water-related protests in Iran this year. Residents of the Khuzestan provincial cities of Khorramshahr, Abadan, and Ahvaz say their water supplies have been polluted for days despite pledges by Iranian authorities to quickly resolve the problem.

Khuzestan, home to mostly ethnic Arabs, is Iran’s main oil producer and contains the country’s largest oil refinery but remains economically disadvantaged compared to northern provinces. Its people have gone weeks without access to clean water. Local water supplies have been undrinkable due to high salinity and mud, and the population has been relying on fresh water distributed by state-hired tankers. However, the supply has not been sufficient, driving up the price of bottled water.

Iranian officials promised that clean, running water will be restored to cities in Khuzestan by Friday as part of the next phase of a water distribution project called Ghadir, yet provincial residents say they had seen no signs of the government fulfilling its pledge.

According to Iranian state media, hundreds of demonstrators joined together in a protest in Khorramshahr on Friday, which turned violent by Saturday. A video posted on social media displayed police firing tear gas at demonstrators, and gunfire was heard in the background. 11 people were wounded, 10 of them officers. Iran’s judiciary also confirmed the arrest of 10 protesters.

Water shortage protests have also been reported on social media in Abadan, and the provincial capital of Ahvaz.

On Wednesday, a Khorramshahr resident confirmed that security continued to be tight in the city. Allegedly, the police have been using concrete barriers to block roads leading to a central square, in an attempt to quell the protests that began on Friday. The resident also claimed that there were reports of police detaining demonstrators indiscriminately. The lack of independent media access has made it difficult to assess the situation in Khorramshar.

Last week, locals blamed the water crisis on suspected government transfers of scarce water supplies to Iraq and nearby Kuwait. In fact, last month, Khuzestan residents broke open and filmed a pipe carrying fresh water toward the Iraqi border. Iranian citizens were outraged by the video, which rapidly spread across social media.

However, Iranian Energy Minister Reza Ardakanian denied the allegations that selling fresh water is being sole to Iran’s neighboring countries.

Trump Will Not Waive Iran Sanctions in May