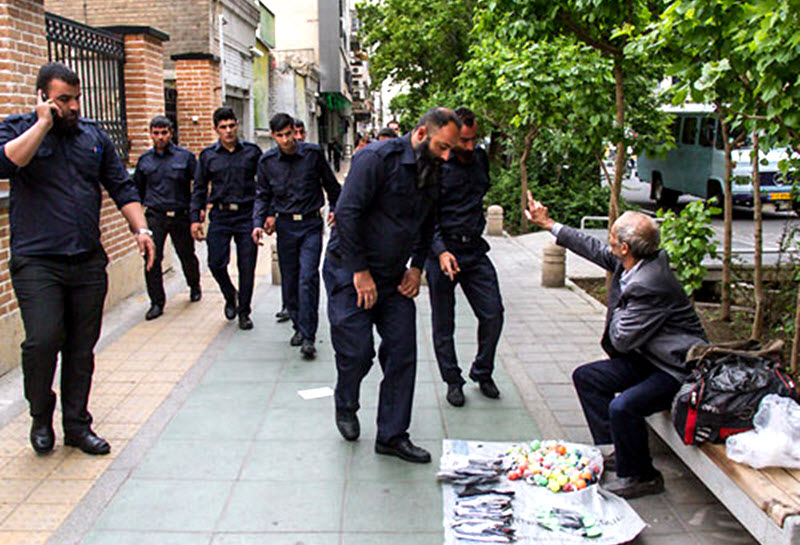 London, 2 Jan-  A senior Iranian official has accused street peddlers in Tehran of being associated with the mafia and threatened to use force against them during a December 30 interview with the state-run ILNA news agency.

Hamid Reza Tahsili, the executive director for Organizing Jobs in Tehran, said: “I believe some of the street peddlers are mafias that should not exist. Some of them have been hired by some people and have taken over our streets and unfortunately, they have rented out all the streets. We will definitely deal with force with these people because we have identified them.”

He went on to say that peddlers not linked to the mafia should go to the areas of Tehran designated for them where they have to pay for booths, tables, tents, and other things, despite the fact that street peddlers barely make enough to survive as it is. In fact, many only become street peddlers as the last option.

He said: “A street peddler who is really needy does not set himself on fire. Members of the mafia definitely self-immolate in a coordinated manner so as to force the Municipality to back down. Those who create this atmosphere or self-immolate, are mafia members who want us to back down and we will never see eye to eye with these people.”

Of course, his comments ignore completely that the Mafia is not known for ritual suicides as a means to pressure the government. Rather, like the fruit seller in Tunisia whose suicide sparked the Arab Spring, they are the desperate actions of people in dire economic situations who have been pushed to the brink.

Street peddlers are not violent criminals. According to an investigation by Iran’s Sociologist Association:

• 31% do not even receive monthly subsidies

• 43% resorted to this job because of unemployment/bankruptcy

This fake description of them as mafia agents is yet another example of how the Iranian government has been trying to scapegoat street vendors as the cause of problems in Iran, without solving the actual problems. And street vendors have only been growing as the economy worsened over the course of last year, causing many to lose their jobs.

They are harassed, arrested, and charged exorbitant bails or fines, which essentially means the government is making a profit on them. Confiscated merchandise is often not returned for months on end and authorities may even demand sexual favours in order to release the goods.

Videos circulating online show the aftermath of street peddlers interactions with the Tehran Municipality’s “Urban Disciplinary Team”, with elderly or young vendors crying at best or being horrendously injured at worst. In fact, there are two suspicious deaths of street vendors on record, in 2014 and 2017.