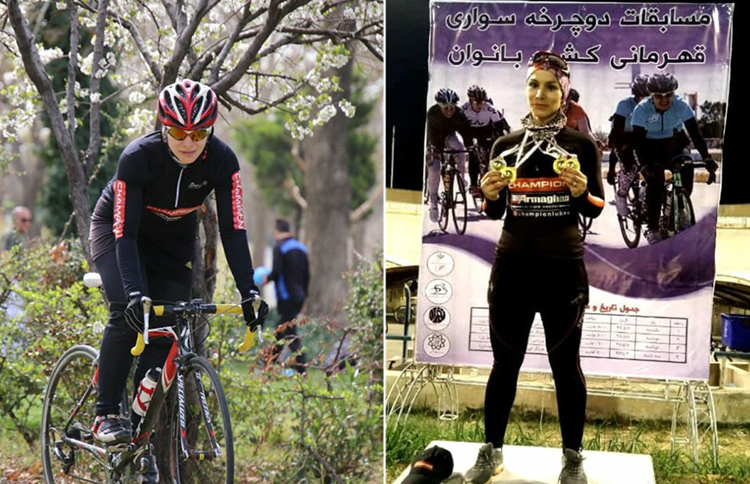 Iran’s record holder in female cycling is living in poverty, forced to peddle in the streets to earn money to support her family, which is a damning indictment of the poverty levels in Iran today.

Atousa Abbasi, who has held the speed record since 2014, is forced to take her 3-year-old child with her when she sells cheap wares on the streets. Despite winning numerous medals, she said no one has given her support.

Abbasi, the first female medal winner in the Asian tournaments, lives with her husband, a former cycling coach, and their child in a rented parking lot.

In a video clip circulating on social media, she said: “During the three years that I was away from bicycling to raise my child, nobody has been able to break my record.”

Abbasi was banned from taking part in cycling tournaments in 2017 due to breaches made by her husband, according to the state-run Mashreq website. Her husband now works as a driver.

She is far from the only female Iranian sports star living in poverty. Sousan Rashidi, the eleven-term champion of women’s kick boxing, is living in poverty whilst training for foreign tournaments, which will make it more difficult for her to succeed.

Rather than focus solely on her training, Rashidi, a nomad girl living in Kermanshah, must work in the village in the mornings, doing tasks like baking bread, taking the sheep for grazing, bringing log wood, etc.

Despite her wins, she didn’t receive any prize money that could have alleviated her poverty. Worse still, due to the poverty, she does not even have her own birth certificate and uses the one belonging to her deceased sister.

The Women’s Committee of the National Council of Resistance of Iran (NCRI) has also reported on a young female PhD student in Computer Engineering who posted an ad selling her kidney on July 23. The 30-year-old needs to pay her disabled mother’s medical expenses, the rent for their house, and her sister’s wedding.

This is yet more evidence that rampant poverty in Iran under the rule of the mullahs is stealing young women’s futures and preventing them from being the best they can be.

Criticism From Inside Iran’s Government Over Broadcasting of Forced Confessions

By Pooya Stone The Iranian authorities’ decision to broadcast...