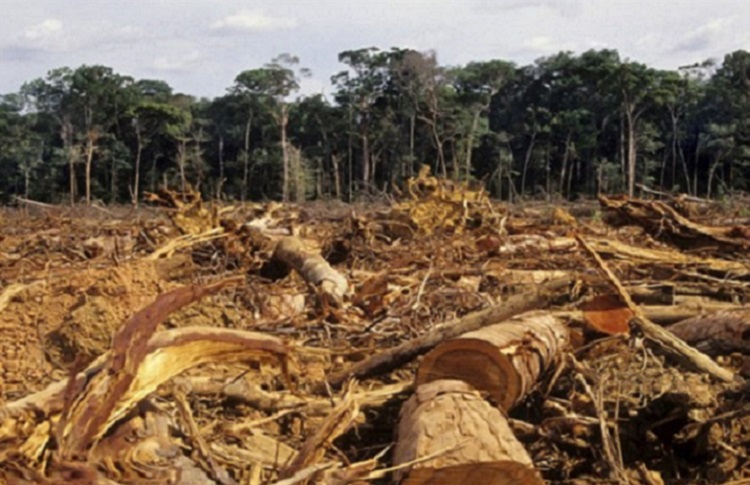 The deforestation disaster in Iran has been kept silent.
In Iran, when we talk about the ecosystem, this phrase only evokes words like disaster, destruction, vanishing and annihilation! This is so serious that some experts predict that many parts of the Iranian plateau will become uninhabitable for decades if the current destructive trend continues!

Without exaggerating, what the current regime of Iran has done with the country’s nature in four decades, tens of tyrannical and criminal regimes failed to do with Iran over thousands of years! Lake Urmia, a hallmark of Persia for thousands of years, is drying up, and the country’s northern forests are destroyed. The rivers are drying up, the lagoons are disappearing, and all of them in the biomass chain cause so much environmental damage that tens of pages cannot describe. Dry rivers lead to desertification and soil erosion, deforestation leads to floods and air pollution, destruction of wetlands leads to the extinction of species of animals and rare birds and …
In fact, we are facing a chain of destruction and vanishing in the ecosystem cycle in Iran. Damages that, if not prevented, could make the same catastrophic prediction for the Iranian plateau!

The problem is big if you consider the proportion of Iran’s forests to its total land. Since Iran is located in an arid zone, forests and other vegetation types have an important role in different aspects of life—social, ecological, and economic. Most of the forests are located on fertile soils, so, traditionally, the demand for changing land use to agriculture is high. Nowadays, many forested lands around the cities are becoming residential, commercial, or industrial areas.

Iran lost some parts of its western forests in the Zagros Mountains during the Iran-Iraq war (1980-1988). Also the Caspian forests were destroyed by mass tourism, land use changes, and mismanagement of forest harvesting.

There are several kinds of endangered species in Iran, such as Asiatic cheetah, Persian fallow deer, Baluchistan black bear, Steppe wolf and Persian leopard. The habitat of some of them are the forests, so the deforestation can lead the declining of their numbers. The situation is becoming grave as there are already some cases of extinction of precious, rare species. For example, the Caspian tiger used to be spread in the middle Asia including the northern forest of Iran. But it has become extinct due to overhunting and destruction of habitats which are forests and watercourses.

Relation between Flood and Deforestation

Except for the middle and eastern deserts, the terrain of Iran is a combination of basin, mountains and highland, and also several rivers in these parts. The water from the rivers is used for the agriculture like cotton and wheat, with farmlands located around the rivers. Therefore, flood can easily occur and result in loss of human life and economic damage.

Deforestation in Iran is one of the factors causing serious flood. It is because when it rains, the rainwater will land on the river and the soil. The water in the soil soon goes into the underground water and then some will return to the river. So, it increases the amount of water in the river, increasing the risk of overflowing its capacity and causing floods. The forest surrounding the watercourse absorbs the water and slows the speed of the rainwater going into underground and soon rivers. So it can lower the rate of rivers from carrying water to reduce the chances of flood. Thus, the human life and their property can be protected.

Some of the Effects of the Deforestation

The destruction of forests in northern Iran would be more clearly understood if we hear that every second, 300 square meters are added to Iran’s deserts. On the other hand, annually, an area equal to 310,000 hectares of forests are destroyed. Certain effects of forest destruction are:

a) Climate change Deforestation is considered to be one of the contributing factors to global climate change. According to Michael Daley, associate professor of environmental science at Lasell College in Newton, Massachusetts, the No. 1 problem caused by deforestation is the impact on the global carbon cycle. Gas molecules that absorb thermal infrared radiation are called greenhouse gases. If greenhouse gases are in large enough quantity, they can force climate change, according to Daley. While oxygen (O2) is the second most abundant gas in our atmosphere, it does not absorb thermal infrared radiation, as greenhouse gases do. The deforestation of trees not only lessens the amount of carbon stored, it also releases carbon dioxide into the air. This is because when trees die, they release the stored carbon.

b) Soil erosion: The destruction of soil comes with other massive losses including the washing away of numerous layers of soil, filling lakes and dams with sedimentation, destruction of buildings and installations located on flood paths.
Regarding soil destruction, statisticians say up to 57 million hectares of soil has been eroded only in 1984- 85.

c) Flooding: Fifteen years ago, in the northern parts of Iran, no flooding occurred even if it rained for four days. Now, 30-40 hours of rain would cause a flood, all due to forest destruction. The damages caused by the Zabol flood in 1990 are estimated at around four trillion rials.

d) Water cycle: Disrupting the water cycle which causes famine because of a drop in the volume of water in subterranean water canals, wells, springs and rivers. Trees are important to the water cycle. They absorb rain fall and produce water vapor that is released into the atmosphere. Trees also lessen the pollution in water by stopping polluted runoff.

World per capita share of forests is about 1.1 hectare. That figure in Iran is less than 0.5 hectare. Among 56 countries with forests worldwide, Iran ranks 45th. In other words, this indicates the prevalence of desert and semi-desert conditions in Iran. Only a limited area (27.6%) of this vast land is covered with forests. Two significant factors could explain this:

1. The natural limiting factor that arises from Iran’s location on the earth.
2. The human factor that adds to this limitation by conscious or unconscious actions.

But the second factor has been much more effective on the speed of deforestation in this country, which means that in the recent decades many of the forests have been destroyed by the government in order to smuggle lumber wood.
Also contributing to the situation is the occupation of forest areas by government-affiliated people, mainly the members of the IRGC, for illegal constructions.

How serious is the problem?

According to NASA aerial pictures, 1 to 1.5 percent of Iran’s forests was destroyed, and with the current deforestation, Iran will have no forest by next 75 to 100 years. As Esmaeil Khoram (adviser to head of Iran’s Department of Environment) says, “Iran receives precipitation well below the global average, and is located in semi-arid and arid climate, so most of our problems have roots in water shortage and this water shortage is increasing the speed of ruining the forests.”

AFP: Fresh US sanctions aim to "expose and disrupt"...