Teachers and Students in Iran Forced to Commute by Boat 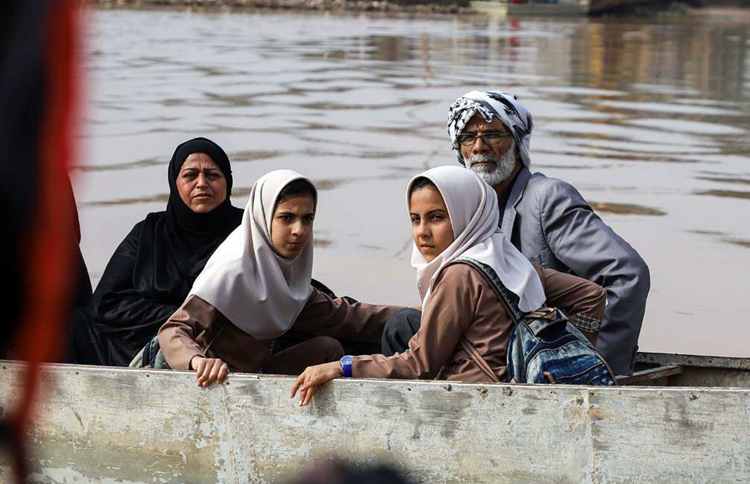 Teachers and students from 37 villages in Khuzestan Province are being forced to use boats or rafts to cross the river to get to school, which has led 20% of students, especially girls, to drop out of school.

The inhabitants of the 37 villages in Bavi county, Khuzestan Province have to commute by boat to the school because there is no bridge, but riding rafts and boats is not safe, especially as the country enters autumn and the rainy season.

However, the governor of Bavi said that the county can’t “do anything”, even build a bridge. Instead, he says that they’ll just “have to wait for the army”.

The floating bridge of Bavi county was washed away during the flash floods in spring 2019 that affected 31 Iranian provinces, including Khuzestan, where the resulting problems seem endless. (The flash floods destroyed the infrastructures of many cities and villages across  Khuzestan, with perhaps the most conspicuous example being in the provincial capital of Ahvaz, where the sewage system’s pipelines broke and black water poured into the streets.)

One environmental expert, who was speaking about the quality of the bridges built in Bavi county, said: “Some 400 bridges in this area which were less than 50 years old were destroyed in the recent floods. While the Sassanid bridges which are 2000 years old are still standing. This is indicative of mismanagement and weak design in our contemporary engineering regime.”

The problem is that a great number of the children (some 200 children in the Sherimeri village alone) cannot commute via boat or raft for a number of reasons, which means that there has been a 20% increase in the number of students dropping out of school as the new school year started.

Another problem is that 10% of the village inhabitants are teachers, who also find it difficult and dangerous to commute by boat. As most of the classes have not yet convened, many teachers have been forced to emigrate from this area. While this is disruptive to the teachers, it also means that there will be fewer teachers for the children who are left, possibly leading to more kids dropping out of school.

Amin Elhaii, director of one of Bavi schools, said, “We have repeatedly met with provincial and county officials bringing up the problem that there are no bridges for the villages in the east of Bavi county. Unfortunately, we have not reached any results.”