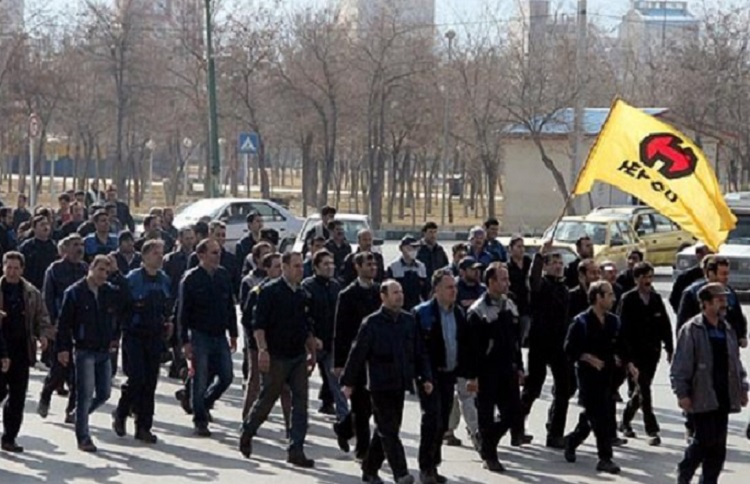 Back in September, workers of Iran’s Heavy Equipment Production Company (HEPCO) marched through the streets of Arak and blocked the north-south railroad to protest months of unpaid wages and the privatization of the company, which has destroyed the once productive factory.

Iran’s riot police and security forces attacked the peaceful protesters and violently beat them with batons, leaving 20 injured, before arresting between 30 and 40 workers.

Iran News Wire tweeted at the time: “This is a dying regime that can’t even tolerate a workers’ protest… This is a disgrace! These are Iranian workers who live in poverty when the regime squanders Iran’s national wealth. International community MUST SPEAK OUT!”

Workers at HEPCO, which was once the largest heavy equipment manufacturer in the Middle East, have held many protests and strikes over the past four years, but their demands have not been met.

Last October, 15 workers were sentenced to prison and lashes for their protests, with even Davoud Mirzaie, the head of the government-affiliated House of Workers in Markazi Province, admitting that HEPCO workers are suffering the consequences of the problems caused by privatization.

HEPCO, which makes construction equipment, agricultural machinery, railroad wagons, trucks and equipment for the oil, gas, energy, metal and mining industries, employs just 700 people; all of whom are in danger of losing their jobs as the company is near bankruptcy.

He told Fahikhtegan Daily: “Unfortunately, the government and the privatization agency did not function correctly in transferring these companies and factories… This has caused workers to sometimes not receive their salaries for months.”

HEPCO, established in 1972, was “privatized” in 2006, with 60% of its shares sold at the low price of 75 billion tomans to a wagon manufacturer affiliated with the Islamic Revolutionary Guards Corps (IRGC), when HEPCO’s assets were worth about 2,000 billion tomans. However, the buyer only paid 21 billion tomans and the rest is still outstanding.

By 2017, HEPCO had accumulated 985 billion tomans in losses and debts.

Other workers are also demanding an end to privatization, including at the Haft Tappeh Sugarcane Company, the Isfahan Polyacryl Company, the Tabriz CNC Machine Factory, the Iran National Steel Industry Group, and the AzarAb company, but the government of President Hassan Rouhani continues its shameful policy of privatizing public companies.