Iran’s Nurses and the 89-Day Plan or Forced Labor 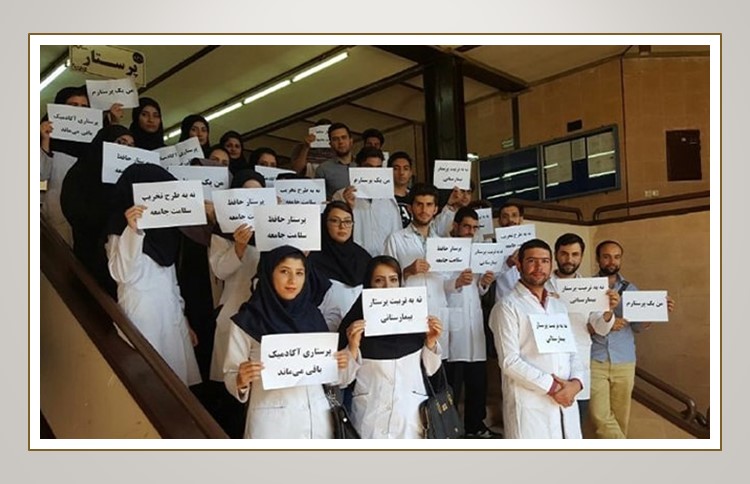 There is often news in Iran of protests by different social classes. Some of these protests are related to the nurses. Nurses, like other strata of Iranian society, do not have a good work situation and livelihood.

The nurse’s name always evokes compassion and kindness. A class that, like a mother who cares for her child, cares for the sick and all members of the society and soothes the pain of the patient and his/her family. But nowadays, nurses in Iran are in a very bad working and living situation.

The 89-day plan for nurses’ employment

In some of the country’s hospitals, nurses work under a plan called the “89-Day Plan”, which includes 89-day contracts so that the contractor does not have to insure them.

Regarding the working conditions of these nurses, it is said that these nurses work 100 hours a month, for which they are paid like regular nurses. This includes night shifts, but, unfortunately, they only get paid 700,000 tomans a month.

According to Hadi Rezazadeh, executive secretary of the Amol Workers’ House, these nurses have been forced to work this way because of inevitably and the lack of the right job.

“These nurses are in a very bad working and living situation,” Rezazadeh added.

Failure to enforce the law of setting tariffs for nursing services

In recent months, nurses in the country have been protesting the failure of the execution of their rights by the Ministry of Health.

According to the nurses, the Ministry of Health has been very passive in fulfill the tariffs for nursing services after 13 years since its adoption and has failed to allocate budgetary funds for its implementation in the budget bill of 2020.

Delay in nurses’ payrolls at hospitals affiliated with medical universities in the country has reached 10 to 14 months in many provinces, while nurses’ demands for overtime work and payment in some cities have not been updated.

One of the plans the government has taken in recent years is the dandelion plan. In the plan, it was approved that the payments should be performance-based, but in practice, the payments were revenue-based, not performance-based. So, both the nurses and the physicians who had the highest income also had the most perceptions. Accordingly, the nurses demanded justice and the removal of the dandelion plan.

As a result of the crackdown on nurses, the Nurse’s House, while expressing the strong protest by the nursing community’s protests against the Ministry of Health because of the failure to remove the barriers on the nursing community, which is in fact people’s problems, announced that they find no reason to attend Nursing Day ceremony.

However, some nurses are under pressure by administrators and heads of hospitals and universities to attend the Nursing Day.

Head of Nursing Organization declared on the eve of Nursing Day “the arrears of some nurses have not been paid for 22 months.”

The Iranian health and medical community have a shortage of about 100,000 nursing staff, and according to the Parliamentary Health Commission spokesman, the country’s nurses are forced to perform “150 hours of overtime.” However, the living conditions of nurses are deplorable.

In 2016, government health ministry officials said that while Iran is facing a shortage of 120,000 nurses, more than 1000 nurses migrate from Iran to Europe annually.

By Jubin Katiraie The human rights situation in Iran continues...