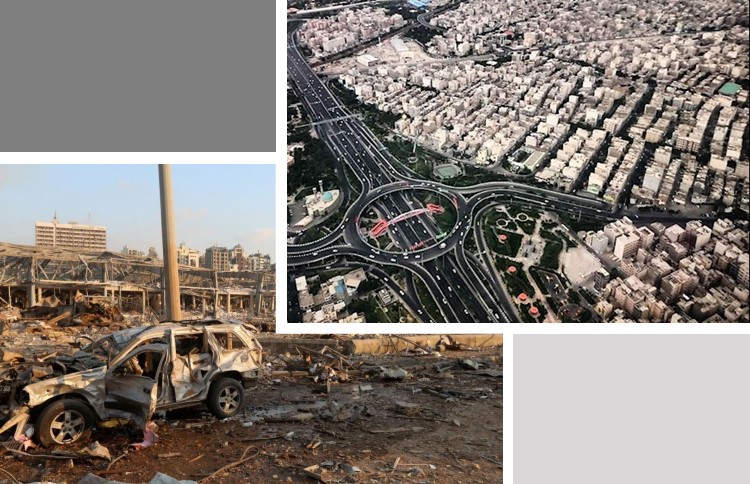 The deadly Beirut explosion shocked many, but mostly worried Iranians, who know that the clerical dictatorship is not bound by any of the principles of urban safety and basically use urban populations to protect their military and nuclear sites as human shields.

The people of Iran have the right to be concerned about their living facilities, while the regime has simply based the military bases in the middle of the cities. Like the base of the independent brigade of Solfaghar in the Ghasr intersection (Tehran).

After the deadly blast in Beirut which had destroyed half of the Lebanese capital, killed, injured and disappeared thousands of civilians due to the storage of explosives and ammunition in a civilian port and urban environment, Reza Karami Mohammadi, head of Tehran’s Crisis Prevention and Management Organization, referring to the danger of such warehouses inside the cities, on 7 August said:

“The chemical warehouses inside Tehran were considered outside the city at the beginning of construction, but with the expansion of Tehran, now they are located inside the city and their existence is dangerous … For example, Shemiran chemical warehouse owned by Besat Oil and Power Plant Company is part of the Ministry of Energy, and these institutions must transfer them.”

On 26 July 2008, the state-run daily Donya-e-Eghtesad wrote: “Large fuel tanks and underground transmission lines are one of the most important high-risk centers in Tehran. Engineer Davood Barati, Deputy of Fire Protection and Prevention of Tehran Fire Department, said: ‘We have repeatedly expressed our concern to the Petroleum Products Distribution and Refining Company.’

In another news, the state-run daily Hamshahri Online wrote on 6 August: “The head of the budget committee of the Tehran City Council announced that due to the existence of an oil depot inside the residential area of ​​Shahran, there is a more terrible catastrophe lurking in Tehran than in Beirut.

“Just as an example, consider the Shahran neighborhood oil depot, where a hydrogen bomb was built inside the city on the Mosha earthquake fault. Shahran oil depot with giant reservoirs is located right in the heart of the residential area northwest of Tehran in Shahran neighborhood and every day about three hundred tanks of 30,000 liters of fuel are loaded from the super reservoirs of this oil depot and then they drive through the residential areas and streets and alleys of Shahran and eventually enter the highway.”

Majid Farahani, the head of the budget committee of Tehran City Council, said: “Any accident in this warehouse can create a more catastrophic disaster than in Beirut in a residential area.”

It should be noted that Shahran is located in the fifth district of Tehran, in the northwest of the city, and adjacent to Sulghan and Kan.

Farahani added: “Now, with the expansion of this neighborhood, at least 300 30,000-liter tankers with all possible dangers pass through the alleys of Shahran every day. It is enough that just for one of the tankers or its transport vehicle to have an accident near the depots while refueling, then with the serial explosion of the fuel tanks, one after another, a bigger catastrophe will befall in Tehran than in Beirut.”

The warehouse in the Turquzabad village, which is one of the places that was noticed after its global disclosure and in the subsequent studies, radioactive materials were also found in it, something that endangered the lives and health of many citizens.

In addition to such centers, we can also mention the Tehran Research Reactor, which is now located in the middle of a densely populated urban area of ​​Tehran.

Isfahan Uranium Enrichment Center is another one of such deadly places, which is now surrounded by residential areas on all three sides, and its distance to the center of Isfahan is much less than the distance of the Chernobyl power plant to the city of Chernobyl.

In the image below, the location of the Isfahan Uranium Enrichment Center is marked with a red circle. Any event can affect the city quickly.

It should be noted that the Chernobyl disaster affected not only the Chernobyl region but also Kyiv and large parts of Ukraine, and for years radioactive radiation contaminated the crops and livestock of Eastern Europe thousands of kilometers away from Chernobyl.

To compare the danger facing the Iranian people, you can see in the image below the distance of the Chernobyl power plant from the city and estimate to find out how dangerous the short distances of the regime’s nuclear sites are from Iran’s cities and residential areas. The red circle shows the Chernobyl power plant and the blue circle is a city 14 and a half kilometers away that was completely destroyed.

In Brief: Iraqi President in Iran for talks

In brief: News from Iran