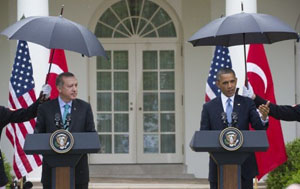 The leaders met in Washington amid a flurry of shuttle diplomacy between world and regional powers ahead of a planned international conference that Washington and Moscow have proposed to halt the violence.

At a joint White House news conference, the Turkish and US leaders restated their position, but Obama admitted: “There is no magic formula for dealing with an extraordinarily violent and difficult situation like Syria’s.”

The talks came a day before another key player, Russian President Vladimir Putin, was set to meet UN Secretary-General Ban Ki-moon, and one day after UN members voted to condemn an “escalation” by Assad’s forces.

Jordan, meanwhile, announced that it would host next week the “Friends of Syria,” the foreign ministers of Saudi Arabia, the United Arab Emirates, Egypt, Qatar, the United States, Britain, France, Turkey, Germany and Italy.

And even as Obama and Erdogan were meeting, Israeli officials told AFP that John Brennan, director of the US Central Intelligence Agency, had arrived in Israel for talks on the Syrian crisis.

Obama has made strenuous efforts to court the Turkish leader but, while they agree that Assad must be ousted, there are signs of frustration in Ankara at Obama’s cautious approach toward the Syrian rebels.

The president has balked at providing arms and ammunition to the guerrillas, fearing they could fall into the hands of extremist elements linked to Al-Qaeda, and is now pinning hopes on the peace conference jointly organized with Russia.

After meeting Erdogan, Obama gave no sign his position has changed.

“We both agree that Assad needs to go. He needs to transfer power to a transitional body,” he said.

“That is the only way we’re going to resolve this crisis. And we’re going to keep working for a Syria that is free from Assad’s tyranny,” he added, vowing to support Turkey in its struggle to cope with a flood of Syrian refugees.

In what was perhaps a sign that Turkey is not yet satisfied with Obama’s stance, Erdogan said: “We will continue to discuss this issue in greater detail in our meeting this evening.”

But he added: “Let me tell you that ending this bloody process in Syria and meeting the legitimate demands of the people by establishing a new government are two areas where we are in full agreement with the United States.”

Before the meeting, speaking on condition of anonymity, a Turkish official told AFP that Erdogan would push for direct US military aid for the rebels.

“Everyone in the international community is very much concerned, worried about the radical elements,” he said.

“We are of course concerned more than anyone else, being a neighbor of Syria — but the way to deal with that problem is not withholding your support. Not doing anything is not a solution.”

Obama has said that Washington has a moral and national security incentive to stop the killing, but has demanded more evidence to stand up reports that Syrian forces have used chemical weapons, crossing a US red line.

But Erdogan insisted: “Let me first of all say that chemical weapons and missiles, rockets, all that, have been fired.

“All that information is shared between the relevant bodies within our administrations and it’s not just Turkey and the United States,” he said, noting that Britain and France had condemned Syrian use of chemical arms.

Turkey also seems skeptical that the peace conference Washington is planning with Assad’s main ally Moscow will produce the kind of roadmap to a political transition — while keeping Syria intact — that the US wants.

“We have to be… realistic and very careful as to not turn this into an open-ended process which would give the opportunity to the regime to gain time and to continue its campaign of violence,” the official said.

Erdogan is now under intense domestic pressure on Syria, following deadly attacks in the Turkish border town of Reyhanli that Ankara has blamed on terrorists with links to the Damascus regime.

Washington and Moscow have issued a joint call for an international conference next month in Geneva to halt the fighting in Syria, but a vote on Wednesday at the United Nations underscored the bitter divide between them.

Russia voted against a motion before the UN General Assembly to condemn what Arab and Western powers denounced as Assad’s “escalation” in attacks on civilians.

The vote passed despite Russian anger but the number of states backing the motion was only 107, down from 133 when a similar vote was held in August, suggesting a weakening of support for Assad’s immediate overthrow.

Russia and China are veto-wielding permanent members of the UN Security Council and have stymied Western-led bids to ramp up the pressure on Assad to step down several times during the war now in its third year.

Putin is likely to press his support for Assad taking part in the negotiated transition in his talks with Ban on Friday at his Black Sea residence in Sochi.

France’s President Francois Hollande said that it was up to the other world powers to persuade Russia that Assad must go.

But there was little sign of Moscow’s position softening, with Russian Foreign Minister Sergei Lavrov declaring that Iran, Assad’s closest regional ally, should have a seat at the conference table.

According to rights activists, more than 94,000 people have been killed in the conflict, which erupted in March 2011 when the regime unleashed a brutal crackdown against what started out as a peaceful uprising.

CNN: Iran continues to evade and violate a U.N.-imposed...

AFP: Sanctions on Iran over its contested nuclear programme...