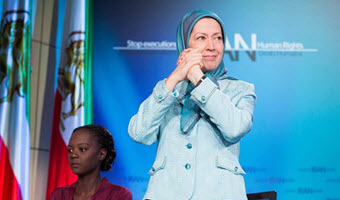 London, 14 Oct – Western governments must stop their silence and inaction vis-à-vis “executions and other atrocities of the religious fascism ruling Iran” and instead “respect the Iranian people’s resistance for freedom”, Maryam Rajavi, President-elect of the National Council of Resistance of Iran (NCRI), told a conference in Paris on Saturday on the occasion of the World Day Against the Death Penalty.

“The clerics hang young men under the name of Islam, despite the fact that the dignity and life of any human being is precious and must be respected”, Maryam Rajavi said.

“According to the holy books, killing one person is akin to killing the entire humanity”, Rajavi said.

“The murderous mullahs have executed more people this year than they did last year. While a single execution is enough to torment everyone’s conscience, world powers have remained disgracefully silent over the situation in Iran, especially as they were engaged in the nuclear talks and were busy striking a deal that would open the path to doing business with the regime. Sacrificing human lives at the altar of commercial interests have never been a good investment for anyone”, Rajavi added.

“If Western governments had stood up to the abuse of human rights in Iran, the mullahs could have never expanded their barbarity to Syria and Iraq”.

“Benefitting from the policy of appeasement, the mullahs have easily occupied large parts of Iraq. They also continued their deadly intervention in Syria to prop up the tyrant of Damascus. The outcome has been the death of 300,000 people in Syria, and the flight of refugees abroad and the emergence of ISIS”, Rajavi said.

“Now that the mullahs have failed in Syria, Russia has step in to save the Bashar al-Assad or at least safeguard its own interests in that part of the world”.

“The ruthless massacre of Syrians continues unabated, something that the whole world must stand up to. The massacre and repression of the Syrian people must be stopped. Some people misconstrue the fall of the Syrian regime as opening the gates of Damascus to ISIS. But this is a misleading argument manufactured by Iran’s ruling mullahs in a bid to save their puppet regime”, Rajavi told to the conference”.

“To the contrary, it is supporting Assad and his continued rule that empower ISIS to continue to survive and expand. By the same logic, the only way to overcome ISIS is to evict the Iranian regime from Syria and Iraq and topple Assad. In step with the clerical regime’s expulsion from Syria and Iraq, all forms of engagement with it must be conditioned on the halt to executions in Iran. As long as this sinister trend continues, there is no justification for reaching out to the mullahs, Rouhani and other officials of this anti-human regime”, Rajavi added.

Addressing Western governments, Rajavi said:
“Stop your silence and inaction vis-à-vis executions and other atrocities of the religious fascism ruling Iran and, instead, respect the Iranian people’s resistance for freedom”, Rajavi said in the conference in Paris on Saturday on the occasion of the World Day Against the Death Penalty”.

Sudanese military factory to be moved from capital