U.N. on target for Iran sanctions by mid-June-sources say

Reuters: A new round of U.N. sanctions against Iran will be ready by mid-June, European diplomatic sources said on Friday, but it remained uncertain how soon a draft proposal will be put to the Security Council. 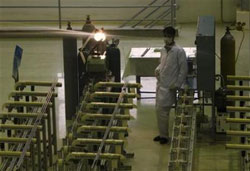 LONDON, May 7 (Reuters) – A new round of U.N. sanctions against Iran will be ready by mid-June, European diplomatic sources said on Friday, but it remained uncertain how soon a draft proposal will be put to the Security Council.

Brazil’s foreign minister told Reuters on Friday that Brazil was working with Iran to find a solution to the stand off over its nuclear programme, a process that could slow the timetable for presenting the draft to the United Nations.

But the European diplomats said mid-June remained the target for getting a fourth round of sanctions passed as the United States and its European partners, with increasing support from Russia and China, move to pile pressure on Iran.

“Brazil and China are now on board,” said one of the sources, who is closely following discussions in New York.

“The timeframe we are working on is … to get a Security Council resolution by the second week of June,” he said.

The European sources said they had expected a draft resolution to go before the 15-member Security Council as early as next week, but U.S. diplomats dismissed that possibility.

“That is not correct,” said a U.S. State Department spokesman.

The EU3+3 — the United States, Britain, France, Germany, Russia and China — have been in discussions for months over a further round of sanctions, while Tehran has indicated that it is prepared to re-open discussions on a fuel swap that might forestall the need for tighter new sanctions.

Iran’s Foreign Minister Manouchehr Mottaki held talks with Security Council diplomats in New York this week and said he had reiterated the possibility of a uranium swap.

“Everybody should give the swap proposal a chance. Everybody should try to find the proper way to solve this problem,” he told reporters in Turkey, where he held talks with Turkish Foreign Minister Ahmet Davutoglu on Friday.

Turkey, one of 10 non-permanent members of the Security Council, remains opposed to further sanctions against Iran and has repeatedly resisted EU attempts to shift its position.

“The Turks have to be convinced a bit more,” one of the European sources said, adding that efforts would redouble in the coming weeks to try to win Turkey over.

At the same time, Brazil is also pushing to give Iran more time. Foreign Minister Celso Amorim told Reuters he saw a window of opportunity to get Iran back on side with its nuclear programme, which Tehran says is only for peaceful purposes.

“I think there’s room (for dialogue),” he said on Friday. “I noticed more pragmatism in the Iranian leadership, an interest in moving forward.”

The European sources said the intention was to get a Security Council resolution by mid-June so that more pressure would be applied on Iran to “re-engage”, rather than allowing it to hold out the possibility of further discussions before a resolution is approved and then renege on the offer.

“They need to get the resolution through, then it has to come back to the EU and to other places to be implemented, and that takes a bit of time,” he said. “They hope that the Iranians will re-engage at that point.”

Catherine Ashton, the EU’s high representative for foreign affairs, has held talks with Turkey’s foreign minister in recent weeks and has indicated that she would be willing to meet the Iranians after new sanctions are in place.

One of the sources said it was possible that she could meet the Iranians in Turkey “this side of the summer” if a new sanctions package is approved by mid-June. (Additional reporting by Raymond Colitt in Brasilia and Daren Butler in Istanbul; Editing by Jon Boyle)

Bloomberg: Iran is using a summit of non- aligned...

Rafsanjani says Iran won in the U.S.-led war on Iraq