No ‘serious response’ from Iran without sanctions: US

AFP: The United States does not expect Iran to provide any “serious response” to concerns about its nuclear program until the United Nations acts on sanctions, Secretary of State Hillary Clinton said Friday. 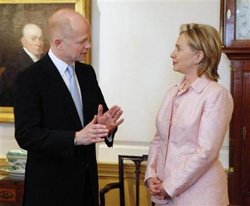 WASHINGTON (AFP) — The United States does not expect Iran to provide any “serious response” to concerns about its nuclear program until the United Nations acts on sanctions, Secretary of State Hillary Clinton said Friday.

“I believe we will not get any serious response out of the Iranians until after the Security Council acts,” the top US diplomat said during a press conference with Britain’s new Foreign Secretary William Hague.

The United States is working to craft consensus on a new round of UN sanctions to punish Iran for its failure to halt uranium production under its nuclear program, which the West fears masks a drive for weapons of mass destruction.

Hague promised there will be a “strong continuity of British policy” on Iran under the new Conservative-Liberal Democrat coalition, saying its approach resembled the approach taken by the previous Labour Government.

“And I fully endorse everything that Secretary Clinton has just said about it,” he said.

“The United Kingdom will work solidly alongside the United States to secure the Security Council resolution we’ve just been speaking of,” he said.

He was referring to US-led efforts for a fourth Security Council resolution imposing sanctions on Iran for its refusal to stop enriching uranium, which can be turned into fuel for a civilian nuclear reactor or fuel for a bomb.

When asked when the two governments might be forced to discuss military action against Iran, Hague replied: “We’ve never ruled out supporting, in the future, military action, but we’re not calling for it.”

“It is precisely because we want to see this matter settled peacefully and rapidly that we call for the sanctions, that we support the idea of a Security Council resolution,” he said.

Iran-Turkmenistan trade close to $2.5b

Reuters: The trial of a French teaching assistant who...