AFP: The United States said Tuesday that China and Russia had backed a tough draft UN sanctions resolution against Iran, even as Beijing offered support for a deal Tehran signed to stave off such a move. 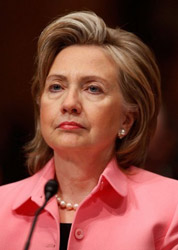 WASHINGTON (AFP) — The United States said Tuesday that China and Russia had backed a tough draft UN sanctions resolution against Iran, even as Beijing offered support for a deal Tehran signed to stave off such a move.

US Secretary of State Hillary Clinton said the draft would be circulated on Tuesday to the UN Security Council, which includes Brazil and Turkey, who brokered a deal for Iran to ship much of its low enriched uranium (LEU) abroad.

Washington had been working with the two powers “on the draft of a new sanctions resolution on Iran, and today I am pleased to announce… we have reached agreement on a strong draft with the cooperation of both Russia and China,” she said.

“This announcement is as convincing an answer to the efforts undertaken in Tehran over the last few days as any we could provide,” Clinton told the Senate Foreign Relations Committee.

Clinton reiterated that Washington had raised “a number of unanswered questions” about the tripartite deal struck on Monday, but welcomed what she called the “sincere efforts of both Turkey and Brazil.”

For Washington, the core issue was that Iran intended to continuing enriching uranium.

Clinton said Washington and its partners “are proceeding to rally the international community on behalf of a strong sanctions resolution that will, in our view, send an unmistakable message about what is expected from Iran.”

Western powers fear that Iran’s atomic program is a cover for a nuclear weapons drive. Tehran denies this, saying the program is aimed at peaceful energy use, which it insists it has the right to pursue.

China had earlier come out in support of the accord Iran signed with Turkey and Brazil to swap much of its LEU on Turkish soil, a deal Tehran hoped would mean it avoided further UN sanctions.

“We attach importance to and support this agreement,” said Chinese foreign ministry spokesman Ma Zhaoxu. “We hope this will help promote the peaceful settlement of the Iranian nuclear issue.”

The Security Council will meet at 4 pm (2000 GMT) on Tuesday to consider the matter.

Monday’s accord commits Iran to deposit 1,200 kilograms (2,640 pounds) of LEU in Turkey in return for fuel for a Tehran research reactor.

Turkish Prime Minister Recep Tayyip Erdogan urged the world community on Tuesday to support the deal, which his foreign minister, Ahmet Davutoglu, warned could be spoiled by talk of sanctions.

But French President Nicolas Sarkozy, whose country along with Britain rounds out the Security Council’s permanent membership, said that while it was a “positive step,” the deal must be accompanied by a halt of Iran’s uranium enrichment.

Tehran said on Tuesday that it expects a swift response from world powers on the accord, which a government-owned newspaper boasted had “checkmated” US efforts for new sanctions.

Iran would notify the International Atomic Energy Agency of the accord “in writing, through the usual channels, within a week,” foreign ministry spokesman Ramin Mehmanparast said.

“We expect members of the Vienna group (the United States, France, Russia and the IAEA) to quickly announce their readiness” to implement the fuel swap, he told reporters.

In October, the Vienna Group made an offer for Iran to ship most of its LEU out of the country in return for higher grade reactor fuel to be supplied by Russia and France.

Iran stalled on the deal insisting it wanted a simultaneous swap on its own soil, a proposal world powers rejected.

Tehran, already under three sets of UN sanctions over its defiant nuclear drive, touted the agreement as a goodwill gesture that paves the way for a resumption of talks with world powers.

Most MPs — 234 in Iran’s 290-member parliament — backed the accord and urged the government to “demand the abolishment of resolutions against Iran” over its nuclear programme, parliament’s website said.

Iran’s archfoe Israel — the Middle East’s sole if undeclared nuclear-armed state — is weighing a formal response to the deal, although a senior official accused Iran of trickery shortly after it was signed.

Sunday Times: Gordon Brown is to discuss the looming...