AFP: German Chancellor Angela Merkel on Thursday called on Iran to “carefully consider” an international offer on its nuclear programme, and also expressed concern over instability in Yemen. 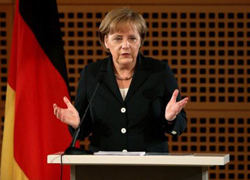 DOHA (AFP) — German Chancellor Angela Merkel on Thursday called on Iran to “carefully consider” an international offer on its nuclear programme, and also expressed concern over instability in Yemen.

“Iran must carefully consider the offer of the international community” on its nuclear programme, Merkel said in a speech at the Museum of Islamic Art in Doha.

Merkel, who is in the Qatari capital as part of a four-nation Gulf tour, said that “the dispute with Iran must be resolved diplomatically and peacefully, and Germany will contribute to such a settlement.”

“But we believe that Iran will not show the necessary transparency to the International Atomic Energy Agency, which is why we are working to strengthen sanctions in the (UN) Security Council,” Merkel said.

In October, the Vienna Group of the United States, France, Russia and the IAEA offered to ship most of Iran’s low-enriched uranium (LEU) out of the country in exchange for higher-grade reactor fuel from Russia and France.

The Islamic republic insisted it wanted a simultaneous swap on its own soil, a proposal rejected by world powers.

Iran struck a deal last week with Turkey and Brazil under which it would ship about half its stock of LEU to Turkey in exchange for reactor fuel, but Washington and its allies have dismissed that agreement.

The United States said it had the backing of China and Russia when it introduced a “tough” draft resolution to the Security Council on May 18 for a new round of sanctions against Iran.

Merkel said she was “very satisfied that after long discussions, Russia and China have decided to adopt a constructive attitude on the issue.”

She also expressed concern about Yemen, noting German citizens have been kidnapped there, and that Nigerian Umar Farouk Abdulmutallab, suspected of attempting to blow up a US-bound airliner, had stayed there.

“All this shows that the problems of Yemen extend beyond its borders, and I agree with leaders in the region that stability in Yemen is important for regional security and the global fight against terrorism,” Merkel said.

The German leader is to travel from Qatar to Bahrain on Thursday, the final stop on her regional tour that also took her to the United Arab Emirates and Saudi Arabia.