Iran Focus: London, Jun. 17 – The following is the full text of an agreement announced by European Union leaders on Thursday tightening sanctions on Iran over its controversial nuclear program. The text was included in the annex to the EU Council’s conclusions at the end of a leaders’ summit in Brussels. 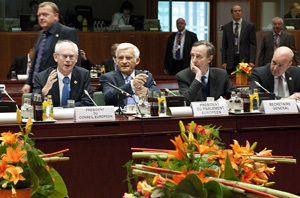 London, Jun. 17 – The following is the full text of an agreement announced by European Union leaders on Thursday tightening sanctions on Iran over its controversial nuclear program. The text was included in the annex to the EU Council’s conclusions at the end of a leaders’ summit in Brussels.

1. The European Council underlines its deepening concerns about Iran’s nuclear programme and welcomes the adoption by the UN Security Council of Resolution 1929 introducing new restrictive measures against Iran.

3. The European Council reaffirms the rights and responsibilities of Iran under the NPT. The European Council deeply regrets that Iran has not taken the many opportunities which have been offered to it to remove the concerns of the international community over the nature of the Iranian nuclear programme. The decision by Iran to enrich uranium to the level of 20 percent, contrary to its international obligations under existing UNSC and IAEA Board of Governors Resolutions, has further increased these concerns. In this regard, the European Council notes the last report of the IAEA of 31 May.

4. Under these circumstances, new restrictive measures have become inevitable. The European Council, recalling its declaration of 11 December 2009 and in the light of the work undertaken by the Foreign Affairs Council thereafter, invites the Foreign Affairs Council to adopt at its next session measures implementing those contained in the UN Security Council Resolution 1929 as well as accompanying measures, with a view to supporting the resolution of all outstanding concerns regarding Iran’s development of sensitive technologies in support of its nuclear and missile programmes, through negotiation. These should focus on the areas of trade, especially dual use goods and further restrictions on trade insurance; the financial sector, including freeze of additional Iranian banks and restrictions on banking and insurance; the Iranian transport sector, in particular the Islamic Republic of Iran Shipping Line (IRISL) and its subsidiaries and air cargo; key sectors of the gas and oil industry with prohibition of new investment, technical assistance and transfers of technologies, equipment and services related to these areas, in particular related to refining, liquefaction and LNG technology; and new visa bans and asset freezes especially on the Islamic Revolutionary Guard Corps (IRGC).

5. The European Council confirms once again the commitment of the European Union to work for a diplomatic solution of the issue of Iran’s nuclear programme. The European Council calls on Iran to demonstrate willingness to build the confidence of the international community and to respond to the invitation for resumption of negotiations, and reaffirms the validity of the June 2008 proposals made to Iran.

6. What is needed is a serious negotiation about Iran’s nuclear programme and other issues of mutual concern. The European Council underlines that the EU High Representative for Foreign Affairs and Security Policy is ready to resume talks in this regard.