Reuters: Britain and the United States said on Tuesday it was not too late for a peaceful solution to the crisis over Iran’s nuclear program, but said they were determined to enforce new sanctions. 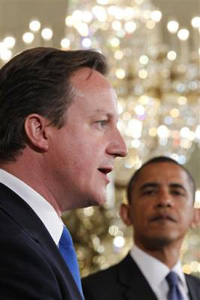 WASHINGTON, July 20 (Reuters) – Britain and the United States said on Tuesday it was not too late for a peaceful solution to the crisis over Iran’s nuclear program, but said they were determined to enforce new sanctions.

The United Nations approved sanctions against the Islamic Republic in June, seeking to put pressure on Tehran to return to talks on its uranium enrichment program. European Union foreign ministers will adopt sanctions going beyond the U.N. restrictions against Iran next week, diplomats said.

“We urge the Iranian regime to resume negotiations with the international community without delay. It’s not too late for them to do so,” British Prime Minister David Cameron said at a joint news conference with U.S. President Barack Obama.

“America and Britain, with our partners, stand ready to negotiate and to do so in good faith. But in the absence of a willing partner we will implement with vigor the sanctions package agreed by the United Nations Security Council and in Europe we will be taking further steps as well,” he said.

Both leaders said Iran had been one of the main issues in their discussions during Cameron’s first visit to Washington as prime minister. Major powers suspect Iran is using its nuclear program to develop atomic weapons, but Tehran says it is enriching uranium only for electricity generation.

“Along with our P5+1 partners,” He said, referring to the five permanent Security Council members and Germany, “we remain committed to a diplomatic solution, but the Iranian government must understand that the path of defiance will only bring more pressure and more isolation.”

The new European Union steps focus on trade, banking and insurance, transport including shipping and air cargo, and important sectors of the gas and oil industry.

Iran’s parliament approved a law on Tuesday calling on the government to retaliate against any countries that inspect its ships and aircraft or refuse to provide fuel to its aircraft as part of foreign sanctions, the semi-official Fars news agency reported.