AFP: A top US financial watchdog outlined fresh measures to isolate Iran Tuesday, as Washington attempts to ramp up pressure on the Islamic Republic over its nuclear program. 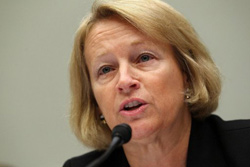 WASHINGTON (AFP) — A top US financial watchdog outlined fresh measures to isolate Iran Tuesday, as Washington attempts to ramp up pressure on the Islamic Republic over its nuclear program.

Securities and Exchange Commission chairman Mary Schapiro told Congress she was working on measures that would make it easier for companies to abandon their stake in firms that trade with Iran.

The rules would “make it clear that an investment company cannot be sued for divesting itself from stocks of companies that deal with Iran,” said Schapiro.

It would also make it clearer when companies face sanctions for dealing with Iran.

“There are punitive sanctions that can be levied against companies that violate the Iran sanctions Act,” Schapiro told the congressional committee.

“That can create material contingent liabilities that need to be disclosed by public companies.”

Earlier this month President Barack Obama signed into law the toughest ever US sanctions on Iran, which he said would strike at Tehran’s capacity to finance its nuclear program and deepen its isolation.

The measures, on top of new UN Security Council and European sanctions, aim to choke off Iran’s access to imports of refined petroleum products like gasoline and jet fuel and curb its access to the international banking system.

The US and allies accuse Iran of building a nuclear weapon. Tehran denies the charges.