Reuters: Talks to revive a stalled plan for Iran to swap some nuclear material for fuel could start within months, the U.N. atomic watchdog chief said on Monday, and there had been some positive signals from the countries involved. 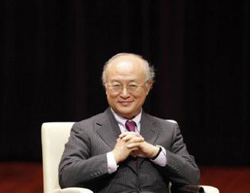 SINGAPORE (Reuters) – Talks to revive a stalled plan for Iran to swap some nuclear material for fuel could start within months, the U.N. atomic watchdog chief said on Monday, and there had been some positive signals from the countries involved.

Iran backed out of a tentative plan brokered by the International Atomic Energy Agency (IAEA) and world powers in October under which it would ship 1.2 tonnes of its low-enriched uranium (LEU) abroad in return for medical reactor fuel.

Tehran showed revived interest in the deal in May after talks with Turkey and Brazil.

IAEA chief Yukiya Amano told Reuters on the sidelines of a lecture in Singapore he had received a “positive reaction” from countries in the “Vienna Group,” comprising Russia, France, the United States and the IAEA, to hold a dialogue on a potential fuel swap soon.

“I am working on that. I have a positive reaction from member states … and why not,” Amano said, when asked if he intended to push for the talks to start in September.

Tehran and Washington also sent positive signals last week about the possibility of wider talks on the Iranian nuclear programme.

The original plan had been seen by the West as a way of divesting Iran of potential nuclear bomb material but officials say it has now lost some of its value because Iran’s LEU stockpile has more than doubled in the meantime.

Iran has given an assurance that it would stop enriching uranium to 20 percent purity if world powers agreed to the fuel swap, Turkish Foreign Minister Ahmet Davutoglu, told reporters in Istanbul last month.

The offer could bode well for an expected resumption of talks in September between Iran and major powers on the Islamic Republic’s atomic program, which Tehran says is for peaceful purposes and not for bombs.

But Amano told the public lecture in Singapore that the talks might not yield a firm result.

“What will be the outcome, there may be not, I don’t know. But starting a dialogue is very important… If we can have a discussion on this issue, that will be positive progress,” he said.

The U.S. State Department said last week Iran had often sent mixed signals, but that Washington was “fully prepared” to resume talks among the six major powers and Tehran about its nuclear programme.

Reuters: Fourteen prisoners were killed and 33 injured in...

AP: The website of an Iranian opposition leader says...