AFP: Iranian President Mahmoud Ahmadinejad urged the United States on Wednesday to join talks on a nuclear fuel swap deal, reiterating that Tehran was ready to start talks near the end of the month. 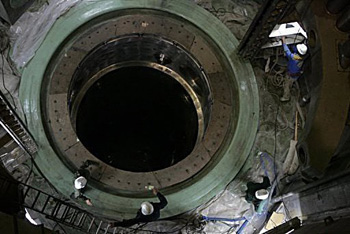 TEHRAN (AFP) — Iranian President Mahmoud Ahmadinejad urged the United States on Wednesday to join talks on a nuclear fuel swap deal, reiterating that Tehran was ready to start talks near the end of the month.

Ahmadinejad also repeated an offer to hold talks with US President Barack Obama on “global problems” at the UN General Assembly in September, although Washington has rebuffed his proposal.

“He (Obama) missed the opportunity last year for a fuel swap; today this opportunity is on the table again,” Ahmadinejad said in a televised speech in the city of Hamedan in western Iran.

“We are ready for talks based on respect, justice and Iran’s proposals after mid-Ramadan (late August) and we advise him (Obama) not to miss this opportunity,” Ahmadinejad said.

Iran said on Sunday it was seeing a “positive” feedback from the Vienna group — United States, Russia and France — over the proposal brokered by Brazil and Turkey to supply Tehran with nuclear fuel.

The May 17 proposal by Iran, Turkey and Brazil, known as the Tehran Declaration, stipulates that Iran send 1,200 kilogrammes (2,645 pounds) of its low-enriched uranium to Turkey in return for 20 percent high-enriched uranium to be supplied by Russia and France at a later date.

The world powers led by Washington had previously cold-shouldered the plan, and backed a fourth round of UN sanctions against Iran on June 9.

The UN sanctions have been followed by unilateral punitive measures imposed by the United States and the European Union.

The world powers suspect that Iran is masking a weapons drive under the guise of a civilian atomic programme, while Tehran insists its nuclear programme has no military aims.

On Tuesday Washington rebuffed a call by Ahmadinejad for face-to-face summit talks with Obama.

Overlooking the US reaction, Ahmadinejad repeated Wednesday, “We are ready to talk to Mr Obama before the nations and present our solutions for global problems and define the roots of the crimes and problems in the world.”

Iranian Official: INSTEX Is a Beautiful Car Without Fuel