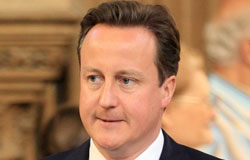 The Labour party blasted Cameron, who heads the Conservatives, as a “foreign policy klutz” with his feet “firmly planted in his mouth”.

Cameron, whose approach to international affairs has come in for criticism since he took office in May, made the comments as he praised Turkey and backed its accession to the European Union.

Taking questions from the public in Hove, Cameron said Turkey could be an important influence in helping solve problems “like the Middle East peace process and the fact that Iran has got a nuclear weapon”.

“He is increasingly getting a reputation for being a foreign policy klutz, with two right feet, both of them firmly planted in his mouth,” said the lawmaker.

Downing Street dismissed the suggestion Cameron had made a slip-up, however, saying that it was “perfectly clear that he is talking about the pursuit of a nuclear weapon”.

Cameron has raised eyebrows with his outspoken remarks on recent foreign visits.

In India, he accused elements in neighbouring Pakistan of supporting terrorism, while in Turkey the prime minister described the Gaza Strip as a “prison camp”.

Some commentators have argued that such forthright remarks show up him as a novice in the world stage, but others have backed his approach as a refreshing break from previous leaders who did not dare to tackle issues head-on.