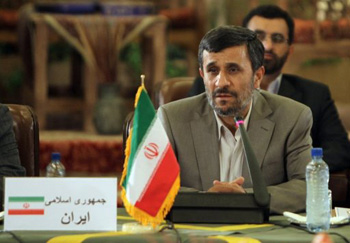 The law, Safeguarding the Islamic Republic of Iran’s Peaceful Nuclear Achievements, had been passed by lawmakers last month and it also stipulates that Tehran limit its cooperation with the UN’s nuclear watchdog, state news agency IRNA reported.

“The construction of one of these will begin by the end of the (current Iranian) year (to March 2011) or the start of next year, inshallah (God willing).”

“This announcement only worsens the international community’s serious concerns about Iran’s nuclear programme,” she added in a statement.

Iran is already refining uranium at its main plant in the central city of Natanz and is building a second enrichment facility inside a mountain at Fordo, southwest of Tehran.

Ahmadinejad announced the planned construction of 10 new enrichment plants late in 2009 after Tehran was censured by the UN atomic watchdog over building the Fordo facility.

Iran’s uranium enrichment programme is at the heart of its nuclear controversy and the key reason for which a fourth round of UN sanctions was imposed on the Islamic republic on June 9.

The Western powers suspect Tehran’s intentions in enriching uranium since the material can be used as fuel to power nuclear reactors as well as to make the fissile core of an atom bomb.

They have been particularly infuriated with Iran for defiantly enriching uranium to the 20-percent level, which theoretically brings it closer to the 90-percent level required to make an atom bomb.

Iran says it is enriching uranium to 20 percent to produce fuel for a research reactor in Tehran and because a potential deal with some of the world powers to supply the required fuel is still embroiled in a deadlock.

On Monday, hardliner Ahmadinejad signed a new law which now obligates his government to continue the 20 percent uranium enrichment work.

Under the new law the government is “obliged to continue its efforts to produce fuel for the Tehran research reactor as well as continue the 20 percent enrichment (of uranium)… and to produce the fuel plates required for the reactor,” IRNA reported.

Western countries say Iran does not have the technology to make the actual fuel plates which would power the reactor.

The new law also stipulates that the government “cooperate with the IAEA (International Atomic Energy Agency) only under the framework of the Non-Proliferation Treaty’s (NPT) general regulations.”

It bans any cooperation that goes beyond the NPT requirements, the English language Press TV said on its website, a measure bound to anger Western powers.

Ahmadinejad ordered in February the refining of uranium to 20 percent after a swap deal, aimed at providing nuclear fuel for the Tehran reactor and drafted by the IAEA in October last year, hit a deadlock.

Brazil and Turkey brokered a counter proposal in Tehran on May 17 under which Iran would send its low-enriched uranium to Turkey in return for research reactor fuel to be supplied later.

But world powers, who voted through a fourth set of sanctions, have raised questions about the counter proposal as they issued calls for discussing Iran’s overall nuclear programme.

Iran says it has responded to their questions and is waiting for an official date for a meeting with the Vienna group to discuss the details of the plan.

The IAEA, the United States, France and Russia, known as the Vienna group, are involved in thrashing out the issue of fuel supply to the Tehran reactor.

By Jubin Katiraie Not a day goes by in...