AFP: Here are the main developments in the standoff over Iran’s nuclear programme, a saga that has lasted for the past five years. 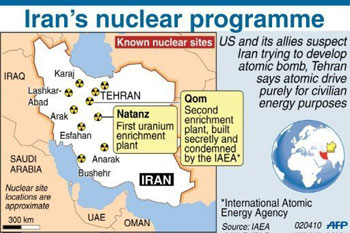 TEHRAN, August 16, 2010 (AFP) – Here are the main developments in the standoff over Iran’s nuclear programme, a saga that has lasted for the past five years.

The West fears Iran is seeking to develop an atomic bomb, but Tehran insists its only aiming to produce electricity.

– Aug 8: Iran resumes uranium conversion activities at Isfahan. The activities had been suspended since November 2004 in agreement with three EU states (Britain, France and Germany).

– Feb 5: Iran ceases to apply the additional protocol of the Non-Proliferation Treaty (NPT).

– Dec 23: The UN Security Council imposes sanctions on Iran’s trade in sensitive nuclear materials and technology. It strengthens the sanctions in 2007, 2008 and 2010.

– April 9: Iran inaugurates its first nuclear fuel plant at Isfahan and says it has installed 7,000 centrifuges at Natanz.

– Oct 21: The IAEA proposes Iran deliver most of its weakly enriched uranium to Russia for further enrichment to 19.75 percent purity before being transferred to France for processing into fuel, for the Tehran reactor. Iran rejects the offer on November 18.

– July 1: President Barack Obama signs the toughest new US sanctions yet into law.

– July 6: Iran says it could resume talks from September 1 with the six world powers. The offer is accepted on the 14th.

– July 26: The EU hammers Iran with fresh sanctions against its energy sector.

– July 30: Iran says it is ready for immediate talks with the United States, Russia and France over an exchange of nuclear fuel and adds it is also against stockpiling higher enriched uranium.

– Aug 3: Washington imposes sanctions on 21 firms in Europe and Japan it believes are front companies for the Iranian government.

– Aug 9: Iran is ready to talk with the US, the adviser to the Islamic republic’s supreme leader Ayatollah Ali Khamenei says. He later denies it.

– Aug 13: Moscow and Tehran announce Iran’s first nuclear power plant, being built by Russia in the southern city of Bushehr, will formally be launched on August 21.

– Aug 16: Iran announces it is to start building its third uranium enrichment plant in early 2011.

– Ahmadinejad signs a new law binding Tehran to pursue the work of refining uranium to 20 percent and limiting its cooperation with the IAEA.