AFP: Israel has “eight days” to launch a military strike against Iran’s Bushehr nuclear facility and stop Tehran from acquiring a functioning atomic plant, a former US envoy to the UN has said. 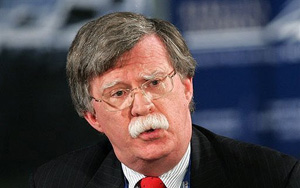 WASHINGTON (AFP) – Israel has “eight days” to launch a military strike against Iran’s Bushehr nuclear facility and stop Tehran from acquiring a functioning atomic plant, a former US envoy to the UN has said.

Iran is to bring online its first nuclear power reactor, built with Russia’s help, on August 21, when a shipment of nuclear fuel will be loaded into the plant’s core.

At that point, John Bolton warned Monday, it will be too late for Israel to launch a military strike against the facility because any attack would spread radiation and affect Iranian civilians.

“Once that uranium, once those fuel rods are very close to the reactor, certainly once they’re in the reactor, attacking it means a release of radiation, no question about it,” Bolton told Fox Business Network.

“So if Israel is going to do anything against Bushehr it has to move in the next eight days.”

Absent an Israeli strike, Bolton said, “Iran will achieve something that no other opponent of Israel, no other enemy of the United States in the Middle East really has and that is a functioning nuclear reactor.”

But when asked whether he expected Israel to actually launch strikes against Iran within the next eight days, Bolton was skeptical.

“I don’t think so, I’m afraid that they’ve lost this opportunity,” he said.

The controversial former envoy to the United Nations criticized Russia’s role in the development of the plant, saying “the Russians are, as they often do, playing both sides against the middle.”

“The idea of being able to stick a thumb in America’s eye always figures prominently in Moscow,” he added.

Iran dismissed the possibilities of such an attack from its archfoes.

Foreign Ministry spokesman Ramin Mehmanparast said Tuesday that “these threats of attacks had become repetitive and lost their meaning.”

“According to international law, installations which have real fuel cannot be attacked because of the humanitarian consequences,” he told reporters at a news conference in Tehran.

Iranian officials say Iran has stepped up defensive measures at the Bushehr plant to protect it from any attacks.

Russia has been building the Bushehr plant since the mid-1990s but the project was marred by delays, and the issue is hugely sensitive amid Tehran’s standoff with the West and Israel over its nuclear ambitions.

The UN Security Council hit Tehran with a fourth set of sanctions on June 9 over its nuclear programme, and the United States and European Union followed up with tougher punitive measures targeting Iran’s banking and energy sectors.

The Bushehr project was first launched by the late shah in the 1970s using contractors from German firm Siemens. But it was shelved when he was deposed in the 1979 Islamic revolution.

It was revived after the death of revolutionary founder Ayatollah Ruhollah Khomeini in 1989, as Iran’s new supreme leader Ali Khamenei and his first president, Akbar Hashemi Rafsanjani, backed the project.

In 1995, Iran won the support of Russia which agreed to finish building the plant and fuel it.