Washington Post: Iran is steadily stockpiling enriched uranium, even in the face of toughened international sanctions, according to a U.N. inspection report that raises new concerns about the ability to monitor parts of the nation’s nuclear program that could be used to make a bomb. 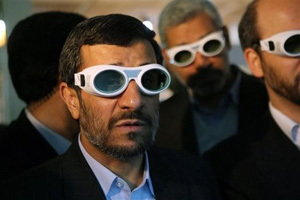 Iran is steadily stockpiling enriched uranium, even in the face of toughened international sanctions, according to a U.N. inspection report that raises new concerns about the ability to monitor parts of the nation’s nuclear program that could be used to make a bomb.

Citing a broad pattern of obstruction, the International Atomic Energy Agency said Monday that it cannot confirm quantities of certain nuclear materials, has a growing list of unanswered questions about enrichment sites and disagrees sharply with Iran’s recent decision to eject two inspectors.

Overall, the agency “remains concerned about the possible existence in Iran of past or undisclosed nuclear related activities involving military organizations,” according to the report, including the possible “development of a nuclear payload for a missile.”

The report estimates that Iran has accumulated about 2.8 tons of low-enriched uranium – material that, if further refined, could be used to make three nuclear bombs – and suggests that the Islamic republic is making headway toward uranium that is weapons-grade.

This year, Iran has produced about 50 pounds of uranium enriched at 20 percent purification levels, according to the report. Iran had not previously exceeded purification rates of roughly 5 percent. A level of 90 percent is generally considered to be weapons-grade.

Iran says its nuclear program is for peaceful purposes, but U.S. and other Western officials say Tehran is pursuing a weapon.

Experts said the report, a quarterly update sent to the 35 member nations of the atomic agency as well as the U.N. Security Council, suggests that Iran is becoming more aggressive in denying inspectors answers about and access to nuclear sites.

“The thing that stands out more and more is how Iran is not cooperating, [even on] inspections under traditional rules,” said David Albright, a former weapons inspector and president of the Institute for Science and International Security. While Iran has long kept aspects of its program hidden, Albright said, “what you’ve seen over the last year is that Iran is making it difficult for the IAEA to do its job at declared sites.”

The report describes a series of recent developments at the main declared site, Natanz.

Last month, Iran informed the agency that it had underestimated the accumulation of nuclear material there and that it had mistakenly broken seals on materials or equipment.

The IAEA said that it has not been granted access to a heavy-water production plant, forcing it to rely solely on satellite imagery to assess the plant’s operations. The agency said it also has been denied information about plans for new enrichment facilities that Iran has said it intends to build.

In a recent reply, Iran said that “it would provide the agency with the required information ‘in due time,'” according to the report. Tehran has previously argued that it is not obligated to disclose even the existence of such facilities until they are completed.

U.S. officials suspect that Iran is pushing its nuclear program as far as it can under U.N. inspections, with an aim of giving the nation’s leaders the option to quickly reconfigure facilities to rush forward the production of a bomb.

Iran says, for example, that it is enriching uranium at 20 percent levels to produce fuel rods for a medical research reactor. But U.S. officials say Iran’s explanation is implausible, in part because it doesn’t have the sophistication to work with medically useful fuel rods.

Despite Iran’s ongoing work, U.S. intelligence agencies have recently concluded that it would take about a year, even under a rushed scenario, for Iran to develop a bomb.