AP: The world’s terrorists are patient and working on a long-term strategy that includes the troubling recruitment of U.S. citizens to help their extremist causes, Massachusetts Sen. Scott Brown said Saturday. 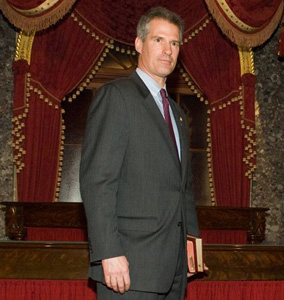 CHELMSFORD (AP) – The world’s terrorists are patient and working on a long-term strategy that includes the troubling recruitment of U.S. citizens to help their extremist causes, Massachusetts Sen. Scott Brown said Saturday.

Speaking on the ninth anniversary of the 9/11 attacks, Brown noted there had been three terror attempts thwarted or botched on U.S. soil in the past year, including one in Detroit and two in New York. And he said he had been briefed on others that had been foiled but not made public.

“We face a wide array of issues and enemies who want to hurt us,” Brown said.

Brown said terrorists are actively recruiting in the U.S., and at least 20 Americans are being trained by extremist groups. Brown said he’d always believed that Americans, no matter their differences, are united in their desire to protect the country.

“I find it very disturbing some people don’t feel that way,” he said.

The Republican, who serves on the Senate’s Armed Services and Homeland Security committees, recently returned from a trip to Jordan and Israel with his terrorism adviser and said that as dangerous as al-Qaida is, the world’s greatest threat is now from Iran.

“There are tentacles everywhere from what I’ve learned and seen and have researched from Iran,” Brown told the annual meeting of the New England Associated Press News Executives Association.

That danger increases with the potential of Iran becoming a nuclear power, which is the greatest fear of the leaders in Israel, Jordan and Saudi Arabia, Brown said.

“They do not want a nuclear Iran to be able to then export its form of terrorism throughout the region and the world,” he said. “It would make it very, very unstable and it would force the other countries on a mad dash to also obtain nuclear weapons.”

Brown said sanctions are finally working on Iran, and more draconian sanctions need to kick in to try to neutralize the threat.

“It’s not hard to imagine what would be unleashed if (militant groups) Hezbollah and Hamas, emboldened by the protective watch of the protector Iran, step up their terrorist campaigns throughout that region and throughout the world,” he said. “Look what happened on 9/11 from the camps throughout Afghanistan.”

Brown said one of the indelible images following the Sept. 11, 2001, attacks was the scene of all members of Congress gathered on the Capitol steps. He said America needs to return to that sense of unity to move forward.

“We’ve kind of stepped back from that bipartisanship and that ability to work for the betterment of our country,” he said. “I’m hopeful we will continue to try to recapture that sense of pride, because that will affect our ability to handle ourselves economically, because we have some very serious economic challenges coming up, and also militarily.”

Brown also attended a wreath-laying in Boston for Sept. 11 victims along with people from some of the 177 families in Massachusetts who lost loved ones in the attacks, and was to join a separate event Saturday honoring firefighters who died.

Iran will not retreat in nuclear standoff  top cleric