Los Angeles Times: Experts say a Chernobyl-like accident at Bushehr is unlikely, but not everyone is convinced. Problem-free generation could mean big business opportunities for the Persian Gulf.

Experts say a Chernobyl-like accident at Bushehr is unlikely, but not everyone is convinced. Problem-free generation could mean big business opportunities for the Persian Gulf. 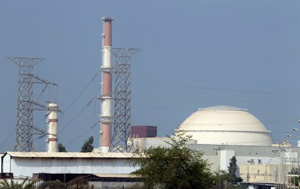 The upcoming launch of Iran’s Bushehr nuclear power plant has sparked fresh worries in the Persian Gulf about a possible atomic accident, but also will usher in an era of business opportunities for the oil-rich and strategically vital region.

Most experts see little chance of a Chernobyl-like accident at Bushehr that would spread a vast radioactive cloud. But gulf residents remain concerned about what they describe as a lack of transparency on the plant and the safety records of Iran as well as Russia, which completed the plant and will help run it for at least a year.

Some say that even a small accident at the plant, which is near the shores of the gulf, could damage the environment, contaminate drinking water and disrupt the fishing and tourism industries. Bushehr lies hundreds of miles south of Tehran but is close to the gulf capitals of Kuwait City and Doha, as well as U.S. Navy 5th Fleet personnel on ships and at bases in the region.

However, a smooth launch of Bushehr could further encourage oil-rich Arab countries to build reactors, and it could provide Iran, which is under Western pressure to halt sensitive aspects of its nuclear program, with new confidence to pursue those ambitions.

“We have the biggest atomic energy station in the entire Islamic world,” Iran’s Atomic Energy Organization chief, Ali Akbar Salehi, said in a recent interview with Iranian state television. “Despite sanctions, the blockade and Western claims and propaganda, thank God, we have become the first state and people [in the Muslim world] to use nuclear energy to produce electricity. We are proud of that.”

The Obama administration has said Iran’s nuclear ambitions could spark an arms race in the Middle East and pose a threat to Israel, which is an undeclared nuclear-armed state. The U.S. has also said the launch of Bushehr proves Iran can peacefully use nuclear energy without producing its own fuel. Such fuel can be used to build atomic weapons as well as produce electricity.

A race to obtain nuclear technology in the Middle East, especially in the gulf region, has already begun. The United Arab Emirates signed a $40-billion deal with a South Korean group in December to build four nuclear power plants by 2020. Saudi Arabia, Egypt, Kuwait, Bahrain, Qatar and Oman have all announced plans to invest billions in atomic energy.

Nuclear energy advocates dream of a network of atomic-powered desalinization plants in the gulf to provide drinking and irrigation water to the parched Middle East.

“There’s a gold rush in the region toward other states having nuclear power plants,” said Theodore Karasik, a former Rand Corp. analyst now at the Dubai- and Beirut-based Institute for Near East and Gulf Military Affairs.

Bushehr is set to begin producing electricity this month and connect to Iran’s power grid by the end of the year, Salehi said. Experts say the light-water reactor is vastly different and less potentially dangerous than the graphite-moderated reactor that exploded in Chernobyl, Russia, in 1986.

“Fortunately they don’t make those reactors anymore,” said Behrad Nakhai, an Iranian American nuclear scientist in New York who worked at the Oak Ridge National Laboratory in Tennessee. “The likelihood of damage to people or damage to the environment is almost nonexistent [at Bushehr]. It’s very low.”

“There is no guarantee at all today, although there are assurances by Iran and Russia, that this is not going to be a Chernobyl-like reactor,” said Sami Faraj, president of the Kuwait Center for Strategic Studies, a think tank. “Until now, Iran has refrained from divulging information about the structure of Bushehr and its security precautions.”

Representatives of gulf states, including Iran and Iraq, are scheduled to meet Sept. 27 in Qatar to discuss coordinating a response to a nuclear emergency.

“In case of an emergency, everyone will be involved,” said Abdul Munem Janahi, director of the Bahrain-based Marine Emergency Mutual Aid Center, which is hosting the event.

The U.S. military did not respond to inquiries about its plans to protect personnel in case of a nuclear accident.

A March 2 review by the International Atomic Energy Agency, the United Nations’ nuclear watchdog, gave Bushehr a clean bill of health but urged that Iran grant its regulators political independence, come up with a comprehensive set of rules and bolster the size and expertise of the safety staff.

Iranian and Russian officials say the reactor is equipped with safety features such as a containment vessel to stop any radioactive leak from spreading. Concrete and steel domes shield it from missile strikes or car bombings. Experts say nothing short of a multi-ton bunker-busting bomb could penetrate the shell. Control rods automatically shut the reactor down in case of a severe disruption, such as an earthquake.

Iran is one of the most seismically active nations in the world. Both it and Russia are also prone to industrial accidents. The website WikiLeaks last year received what it described as a credible report of a nuclear accident at Iran’s Natanz enrichment facility, resulting in the replacement of Atomic Energy Organization chief Gholam-Reza Aghazadeh with Salehi.

Bushehr, where construction began in the 1970s by a German firm that later became Siemens, uses an untested hybrid of European parts and design and Russian VVER-1000 plant technology developed in the 1970s and ’80s. A years-old U.S. Department of Energy assessment described the Russian plant design as having “substandard” instruments and controls and “deficient” quality-control standards.

But experts say Russia is taking no chances at Bushehr for fear of losing out on future multibillion-dollar deals. It has already sold Turkey on a nuclear plant, which is to begin construction next year, and hopes to expand the business.

“The U.S., France, South Korea, Russia are vying for these lucrative contracts based on their safety records,” Karasik said. “Bushehr is a plant that has been and will be subject to a lot of scrutiny.”

USA TODAY: For the first time in a quarter-century...