Daily Telegraph: Iran has agreed to donate $25 million (£16 million) to Turkey’s ruling Justice and Development Party (AKP) in a move that will increase fears that Prime Minister Tayyip Erdogan is preparing to abandon the country’s secular constitution.

Iran has agreed to donate $25 million (£16 million) to Turkey’s ruling Justice and Development Party (AKP) in a move that will increase fears that Prime Minister Tayyip Erdogan is preparing to abandon the country’s secular constitution. 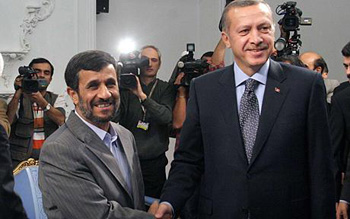 Western diplomats say they are alarmed by reports that Mr Erdogan has negotiated a deal with Iranian President Mahmoud Ahmadinejad for Tehran to make a substantial contribution to the campaign funds of Turkey’s leading Islamic party.

Under the terms of the deal Iran has agreed to transfer $12 million to the AKP, with further payments of up to $25 million to be made later in the year. The money is to help support Mr Erdogan’s campaign for re-election for a third term in next year’s general election.

The Turkish prime minister announced he would stand for a historic third term following his success in last weekend’s referendum on constitutional reform.

The government argued that the reforms were necessary to improve Turkey’s chances of membership to the European Union. But secular critics of the reforms, which provide the government with powers to overrule Turkey’s powerful judiciary, argue that they will pave the way for a key Western ally to become an Islamic state.

The judiciary is widely regarded as the guardian of Turkey’s secular constitution. In 2008 it came close to banning the AKP after it campaigned for women attending university courses to wear Islamic headscarves.

Western diplomats now fear that the AKP’s deal with Iran will heighten fears among Turkish secularists that Mr Erdogan will exploit the government’s new powers to drive through the AKP’s radical Islamic agenda.

“The agreement between the AKP and Iran is a very worrying development,” said a senior Western diplomat. “It will increase the suspicions of many Turks that the government is deepening its ties with Islamic states.

Earlier this year Turkey annoyed Washington after it publicly backed Iran’s controversial nuclear programme. Relations between Turkey and Iran have deepened following Ankara’s backing for the aid flotilla which attempted to break Israel’s blockade of the Gaza strip.

Apart from transferring funds to the AKP, diplomats say Iran has also agreed to provide financial support for the IHH, the Turkish Islamic charity IHH which supported last May’s aid flotilla which ended in disaster when it was intercepted by Israeli commandos, which resulted in the deaths of nine activists.

AFP: The UN nuclear chief Friday said he was...