Russia pushing back on tougher sanctions against Iran

Los Angeles Times: Even as the White House praised Russia for declining to sell antiaircraft missiles to Iran in violation of U.N. sanctions, Russian diplomats were quietly recruiting other countries this week to undercut tougher penalties imposed on the Islamic Republic.

Moscow is rallying developing countries to oppose unilateral sanctions on Tehran by the U.S. and its allies. The move raises questions about efforts against Iran, and U.S. ties with the Kremlin. 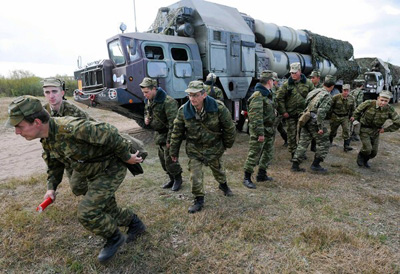 Reporting from the United Nations — Even as the White House praised Russia for declining to sell antiaircraft missiles to Iran in violation of U.N. sanctions, Russian diplomats were quietly recruiting other countries this week to undercut tougher penalties imposed on the Islamic Republic.

Russia supported weak United Nations sanctions approved in June to pressure Iran over its nuclear program. But it has strongly objected to tougher sanctions added individually by the United States, the European Union and four other countries. It fears those sanctions may end up hurting Russian companies that do business in Iran.

It is unclear whether Russia’s effort at the U.N. this week to rally major developing countries will bear fruit. But Moscow’s pushback sends a troubling signal about the prospects for more rigorous efforts to force Iran to bend. And it raises questions about whether the Obama administration has much to show for its highly publicized effort to “reset” relations with the Kremlin.

Although Tehran insists it is interested only in generating electricity, the U.S. and many other countries believe Iran’s nuclear program is aimed at trying to build a bomb. Frustrated at the relatively weak sanctions approved in June that targeted arms sales, Iran’s nuclear sector and the Revolutionary Guard, the Obama administration and its allies imposed their own sanctions aimed at crimping trade and cutting off foreign investment in Iran’s vital energy sector.

As diplomats from around the world convened in New York for the annual United Nations General Assembly meetings this week, Russian diplomats tried to enlist like-minded countries to make a stand against those unilateral sanctions.

In a Wednesday meeting with diplomats from China, India and Brazil, the Russians raised the prospect of a U.N. General Assembly resolution that, while not binding, would send a loud signal from countries eager to seize opportunities in Iran’s energy sector — and probably weaken the ability of the U.S. and its allies to get other nations to go along with their tougher approach.

All four countries oppose the unilateral sanctions. Another important opponent is Turkey, which has signaled a keen interest in additional energy deals with its neighbor Iran.

Among members of this group, “there is a broad agreement on principles,” said a diplomat from a nation involved in the talks. The diplomat, who spoke on condition of anonymity, said the group is not yet ready to offer a specific resolution.

Sergei Ryabkov, the deputy Russian foreign minister, said it was unfair for the U.S. and Western allies to unilaterally impose tough measures after they had failed to persuade other U.N. Security Council members to accept them.

“They adopt precisely the same elements that we were unable to agree with at the United Nations,” Ryabkov said in an interview. “This is really a question of political ethics, political morality.”

Russia, which has just completed construction of Iran’s first nuclear power plant in Bushehr, sees large business opportunities in the Islamic Republic. But Moscow fears that the U.S. sanctions could prevent Russian companies from doing business with the United States if they also are doing business in Iran. Another concern is that multinational companies based in other countries might shy away from dealings with their Russian counterparts for fear that they too will face punishment from Washington.

Since the U.N. resolution was adopted, Turkey and China have sold huge cargoes of gasoline to Iran, energy traders say. Russia signed a long-term partnership with Iran’s Energy Ministry, and China has increased its commitment to invest in the energy sector to $40 billion.

Although those actions do not violate the U.N. sanctions, they underscore a vulnerability for the U.S. and its allies. If some countries continue to do business with the Iranian energy sector, Western companies may pressure their governments to drop the sanctions, which put them at a competitive disadvantage.

Senior U.S. State Department officials said they were aware that some countries were talking about resisting the sanctions, but downplayed the threat.

Diplomats say that one potential way out of the dispute is to open discussions on a plan to limit how far individual nations can go in imposing their own penalties on a country that already is under U.N. sanctions.

Russia’s maneuver also raises questions about the Obama administration’s claims of improved ties with Moscow, suggesting that the relationship remains more complicated than the administration is ready to acknowledge.

On Wednesday, the White House praised Russia for deciding against a sale of antiaircraft missiles to Iran, saying Russian President Dmitry Medvedev had “shown leadership in holding Iran accountable for its actions, from start to finish.”

Mark Dubowitz of the Foundation for the Defense of Democracies, a research organization that advocates tough sanctions, said Russia has been playing a “double game, voicing a kind of tepid support” for the Western effort, even while continuing to build economic ties with Tehran.

He said that a U.N. resolution from this group would be a “shot across the bow” of the U.S. and its allies.

Dubowitz said that Russia and China have done little to enforce any of the sanctions, and that major Russian and Chinese companies continue to pursue business with Iran as Western companies pull back to avoid being punished.

China has been “even more active in the energy sector, scooping up deals left by others,” he said.

Dubowitz said that Robert Einhorn, the senior State Department official responsible for organizing international enforcement of the sanctions, has yet to meet top Chinese officials although he sought a meeting more than a month ago. U.S. officials say it is a scheduling problem; Dubowitz said it reflects Chinese resistance.

Paul Saunders, a Russia specialist at the Nixon Center in Washington, said Russia’s actions “make clear Russian ambivalence, and suggest it’s going to be difficult, if it’s possible at all, to get Russia to do much on the sanctions.”

He said Russian officials had promised the Iranians during the U.N. Security Council negotiations leading to imposition of the sanctions that “we’ll take care of you.” But Moscow was put in an awkward position when the U.S. and several allies added their own tougher sanctions within two months.

Saunders said another reason for the resistance of Russian and Chinese officials to the sanctions is that many senior officials in those countries have personal financial ties to the big energy companies.

Ryabkov, the Russian diplomat, said Moscow and its allies were objecting not only to the sanctions, but also to the pattern of Western countries trying to win mild sanctions at the U.N. to establish the international legitimacy of the effort, only to follow up with much tougher unilateral punishments.

Iran has announced plans on Monday to further violate...