AFP: The foreign minister of Pakistan said Monday that Iran had no justification to pursue nuclear weapons and urged the neighboring country to embrace overtures from the United States. 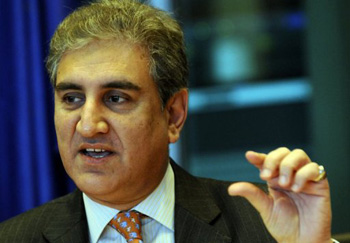 WASHINGTON (AFP) — The foreign minister of Pakistan said Monday that Iran had no justification to pursue nuclear weapons and urged the neighboring country to embrace overtures from the United States.

In some of Pakistan’s strongest statements on Iran’s controversial nuclear program, Foreign Minister Shah Mehmood Qureshi said that he wanted to avoid “another major crisis in the region.”

“In my view, I don’t think they have a justification to go nuclear,” Qureshi said at Harvard University.

“Who’s threatening Iran? I don’t see any immediate threat to Iran,” he said, while adding that Pakistan accepted Iran’s “right to civilian use of technology.”

Qureshi said he has shared his views with Iranian Foreign Minister Manouchehr Mottaki and told him to seize on US President Barack Obama’s stated willingness to engage in dialogue to mend decades of fraught US-Iranian ties.

“This administration has been extending the olive branch — make use of it. Engage the world,” Qureshi said.

Pakistan has a mostly friendly but complicated relationship with Iran’s Shiite clerical regime. Baluchistan province stretching between the two nations is rife with insurgency and sectarian violence between Sunnis and Shiites.

Pakistan and Iran in June signed a deal that commits Tehran to selling natural gas from a pipeline. The United States has warned against the project as it steps up sanctions on Iran over its nuclear program.

Pakistan’s Prime Minister Yousuf Raza Gilani said at the time that Islamabad would implement UN resolutions on Iran but not unilateral US restrictions.

Qureshi said that Pakistan faces a threat from India, making its case different than Iran’s. Pakistan became the Islamic world’s only nuclear weapons state in 1998, days after its historic rival carried out similar atomic tests.

Qureshi also pointed out that Iran was signatory to the nuclear Non-Proliferation Treaty, which Pakistan and India never signed.

“They have an international obligation. They have signed NPT and they should respect that,” he said.

Abdul Qadeer Khan, the father of Pakistan’s bomb, confessed on television in February 2004 that he ran a nuclear black market that sent secrets to Iran, Libya and North Korea. However, Khan later retracted his remarks.