Reuters: European Union foreign affairs chief Catherine Ashton reissued an invitation to Iran on Friday to hold talks on its nuclear program next month, while Russia also pressed Iran to take up the offer. 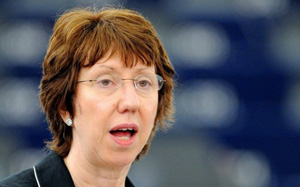 BRUSSELS/MOSCOW (Reuters) – European Union foreign affairs chief Catherine Ashton reissued an invitation to Iran on Friday to hold talks on its nuclear program next month, while Russia also pressed Iran to take up the offer.

In a letter to Iran’s ambassador to the European Union, Ashton urges Iran’s chief nuclear negotiator, Saeed Jalili, to take up the offer of talks in Vienna from November 15-17, with the discussions to cover the nuclear program and “any other items pertinent to the discussion”.

“The meeting could start with a dinner on November 15, followed by two days of consultations to enable substantial discussions,” reads a copy of the letter seen by Reuters.

“Given the proximity of the suggested dates and the diary constraints of the parties involved, I do hope for your early and positive response.”

Ashton has the backing of the six major powers involved in nuclear negotiations — the United States, Russia, France, Britain, China and Germany — to make contact with Tehran.

She last issued an invitation to talks, which would be the first high profile contact in a year, on October 14 but has yet to receive a formal reply, although Iran has intimated through its media that it welcomes the invitation.

Tehran has been ambiguous about its willingness to go back to talks and dispel concerns that its declared civilian atomic energy program is a cover for the pursuit of nuclear weapons.

“We urge our Iranian friends and colleagues to officially respond in a positive manner to the invitation,” Interfax quoted Ryabkov, Russia’s representative to negotiations between Iran and the six powers, as saying in an interview in Brussels.

A senior Iranian official said on Monday Iran was ready to meet any time but said the subject must be made clear in advance, among other conditions.

Iran has long insisted on a right to peaceful nuclear technology, and that it is not seeking nuclear weapons. But its past concealment of sensitive nuclear activity and continued curbs on U.N. inspections has raised suspicion abroad.

Iran’s first, Russian-built nuclear power plant is to go on line soon and the government says it plans build up to 20 reactors over the next two decades.

Talks with the six powers stalled in October 2009 and governors of the International Atomic Energy Agency passed a resolution two months later rebuking Iran for having hidden a second uranium enrichment project for more than two years.

Russia has expressed increasing frustration with Iran’s refusal to suspend enrichment in exchange for trade and diplomatic incentives on offer from the six powers since 2006.

Moscow, which long sought to temper Western efforts to isolate Iran, endorsed harsher U.N. sanctions against Tehran in June and later announced it would not fulfill a contract to sell S-300 air defense missile systems to the Islamic Republic.