Washington Post: Iran started to fully load fuel into its only nuclear reactor Tuesday, after a leak in the Russian-built reactor’s basin delayed the process for months, state media reported. 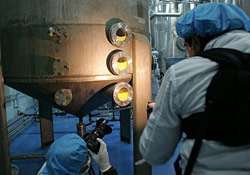 TEHRAN – Iran started to fully load fuel into its only nuclear reactor Tuesday, after a leak in the Russian-built reactor’s basin delayed the process for months, state media reported.

The Atomic Energy Organization of Iran (AEOI) said that tests had been run and that it had started loading 163 fuel rods into the reactor’s core, bringing the country closer to its goal of becoming a user of nuclear energy.

Secretary of State Hillary Rodham Clinton said Tuesday that the United States does not object to the reactor, but that it remains concerned about facilities where Iran may be working on nuclear weapons.

“Our problem is not with their reactor at Bushehr,” she said. “Our problem is with their facilities at places like Natanz and their secret facility at Qom and other places where we believe they are conducting their weapons program.”

Iranian officials held a ceremony for fuel loading in August, but the process was repeated Tuesday. Iran denied that the Stuxnet computer virus delayed the start-up, although the virus did infect some computers at Bushehr. Some analysts said the worm was designed to sabotage the nuclear program.

State television reported that one of the basins was found to be leaking in August. But AEOI head Ali Akbar Salehi said, “These delays are a result of the testing process which . . . is something natural.”

A Tehran-based nuclear analyst who spoke on the condition of anonymity said Iranian officials had properly tested the new equipment in August. “I don’t think the delay is of importance, nor have there been serious problems at Bushehr,” the analyst said.

Russia is supplying the uranium fuel for the plant for 10 years, at an enrichment level well below what is needed for a nuclear weapon.

The 1,000-megawatt nuclear power plant is expected to start generating electricity in about three months, more than 35 years after the start of construction, Salehi said. He added that more nuclear reactors would be built soon. The original contractor was Siemens, a German company.

In a news conference, Salehi said Western criticism of Iran for its controversial nuclear program is a “concocted” issue. “This case has been created with the pretext to exert political pressure on Iran,” he said.

The plant, near the city of Bushehr along the Persian Gulf, is not widely regarded as a threat by Western countries, which fear that Iran is making a nuclear weapon. Iran denies that it is doing so. In Iran, by contrast, the project is a symbol of the Islamic Republic’s progress despite sanctions against the country.

At the start of fuel-loading tests in August, Israel said it was not particularly worried about the plant. But Israeli officials, who say Iran is planning to make a nuclear weapon, said they wanted Iran to stop enriching uranium.

The loading of fuel at the Bushehr reactor is overseen by the International Atomic Energy Agency, Iranian officials said.