Reuters: Iran’s envoy to the U.N. nuclear agency dismissed on Tuesday a U.S. suggestion that Tehran should agree to tougher conditions than those it rejected last year for a possible nuclear fuel swap. 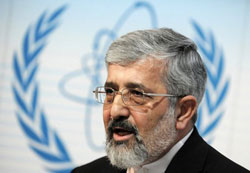 VIENNA (Reuters) – Iran’s envoy to the U.N. nuclear agency dismissed on Tuesday a U.S. suggestion that Tehran should agree to tougher conditions than those it rejected last year for a possible nuclear fuel swap.

Western diplomats say economic sanctions are beginning to have an impact on Iran, and it may be possible to revive the fuel exchange plan if it also accepts broader talks they hope will lead to Tehran agreeing to curb its enrichment drive.

They have made clear any new deal must be updated to take into account Iran’s increased holdings of low-enriched uranium (LEU) material which can be used to build bombs if refined much further, and its work to enrich to higher levels since February.

“I’m afraid there is no logic for these kind of statements,” Ambassador Ali Asghar Soltanieh told Reuters when asked about a U.S. media report that Iran would be required to part with some two metric tons of its uranium stockpile under a revised proposal.

Iran has said it is ready to meet with the powers involved in efforts to defuse the dispute over its nuclear program — the United States, Germany, France, China, Britain and Russia — later this month at a time and place still to be determined.

It would be the first such meeting in more than a year and also the first since the United Nations, the United States and the European Union imposed harsher sanctions on Iran, the world’s fifth-largest oil exporter, earlier this year.

But the Islamic Republic is showing no sign of backing down over uranium enrichment work it says is designed to generate electricity but the West suspects has military aims.

The major powers want Iran to suspend all such activities. Iran has consistently rejected this demand, saying it is its national right to develop nuclear energy.

Last week, the U.S. State Department said Washington and its European allies were preparing a new offer to Iran on the fuel exchange, seen as a possible confidence-building step.

The New York Times said it would require Iran to send about 2,000 kg of LEU out of the country. That would represent a more than two-thirds’ increase from the amount required under a tentative deal a year ago that later collapsed.

Iran would also need to stop production of nuclear fuel it is enriching to 20 percent, a key step toward bomb-grade levels, and agree to negotiate on the future of its nuclear program, the Times said..

Soltanieh, Iran’s representative to the International Atomic Energy Agency (IAEA), reiterated that Tehran would be ready to resume talks on the fuel swap plan but declined to comment on any broader negotiations with the six powers.

However, he said Iran only needed 120 kg of uranium enriched to 20 percent as fuel for the Tehran reactor producing medical isotopes and this was the equivalent of 1,200 kg of LEU.

“Therefore when we don’t need more fuel it is ridiculous to ask to have more (LEU) to send out,” Soltanieh said.

“This (demand) could only be interpreted as sort of an excuse not to come to the negotiating table,” he added.

Reuters: The Iranian authorities have detained six members of...