Reuters: China hopes that next week’s talks in Geneva about Iran’s nuclear programme are constructive and that all who attend push for progress, the country’s foreign minister was quoted as saying by state media on Friday. 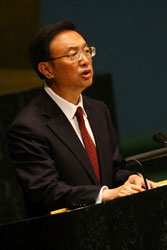 BEIJING Dec 3 (Reuters) – China hopes that next week’s talks in Geneva about Iran’s nuclear programme are constructive and that all who attend push for progress, the country’s foreign minister was quoted as saying by state media on Friday.

Talks between Iran and six big powers — the United States, France, Russia, Britain, China and Germany — are due to resume next week in the first such meeting in more than year.

“China hopes that all sides attend with a constructive attitude, and together push forward the dialogue to achieve positive progress,” the official Xinhua news agency paraphrased Yang as telling Ashton. “This accords with the interests of all.”

China was willing to work hard with the EU and others to make sure his happened, Yang added.

Xinhua cited Ashton as telling Yang that China was an important participant in the talks, and that the EU was willing to work with China to achieve progress.

The six powers are hoping the discussions will focus on Tehran’s disputed nuclear programme, but Iranian President Mahmoud Ahmadinejad has repeatedly said that uranium enrichment activity will not be up for negotiation.

Iran says its nuclear programme is purely for peaceful purposes.

Pressure on Iran to return to negotiations has increased since June, when the United Nations imposed a fourth round of sanctions on the country, with the measures targeting the leadership as well as shipping and energy interests.

China, which has close energy and trade ties with Iran, has backed U.N. Security Council resolutions pressing Iran to abandon its disputed nuclear activities, which Western governments say are aimed at giving Iran the means to make weapons.

But Beijng has expressed opposition to unilateral sanctions against Iran imposed by Europe or the United States.