Wall Street Journal: The production of yellowcake, a coarse powder, is the first step in a complex process that converts uranium ore into either the fuel for a nuclear-power reactor or the uranium metal used in an atomic weapon. 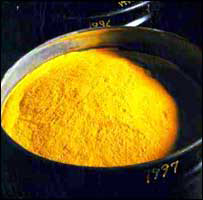 GENEVA—The production of yellowcake, a coarse powder, is the first step in a complex process that converts uranium ore into either the fuel for a nuclear-power reactor or the uranium metal used in an atomic weapon.

Mining companies seek to extract high grades of ore, with levels of 20% uranium, for processing into yellowcake. The material is then converted into a gas that is fed into centrifuges and spun at supersonic speeds into various levels of fissile material.

Uranium enriched to 3%-5% can fuel a nuclear-power reactor, while enrichment to 90% can create the fissile reaction of an atomic weapon.

Iran has two uranium mines, one in Saghand, central Iran, and one in the town of Gachin, near the Persian Gulf. Iranian officials Sunday said the ore was processed into yellowcake near the port city of Bandar Abbas and then transported to Isfahan, where the material will be converted into uranium hexafluoride, a compound easily converted into a gas.

Nuclear experts believe Saghand’s uranium ore is largely too low grade for use in making the yellowcake used in a nuclear program. Gachin has better-quality ore, but is believed to be capable of producing only 21 tons of ore per year. Iran’s Arak heavy-water reactor is estimated to need the equivalent of 500 tons of ore to operate in producing nuclear power.

Iran imported 600 tons of yellowcake from South Africa during the 1970s under the leadership of the late Shah Reza Pahlavi. Iran is believed to have used as much two-thirds of this original stockpile for conversion into low-enriched uranium at the Natanz nuclear-fuel plant in central Iran.

Nuclear experts don’t believe Iran’s yellowcake reserves are nearly enough to fuel a nuclear-power program, but they are seen capable of creating a small arsenal of atomic weapons. Experts note the Gachin mine isn’t under United Nations safeguards, meaning the material could be potentially used for military purposes.

AP: John McCain and Barack Obama are using the...

New York Times: In their last report before the...