AFP: Iran is yet to agree on an exact date for the next round of nuclear talks with world powers due to be held next month in Istanbul, foreign ministry spokesman Ramin Mehmanparast said Tuesday. 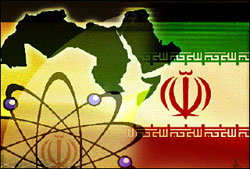 TEHRAN (AFP) — Iran is yet to agree on an exact date for the next round of nuclear talks with world powers due to be held next month in Istanbul, foreign ministry spokesman Ramin Mehmanparast said Tuesday.

“There is an agreement on the venue of the meeting but the date has not been finalised yet. Consultations are ongoing to organise talks in Istanbul somewhere around the end of January,” Mehmanparast told reporters.

A senior Iranian official said in Damascus on Monday that next month’s talks could resolve the dispute over Iran’s nuclear programme.

“We think (the negotiations), in line with the agenda decided in Geneva, could clear the way to resolving problems,” said Ali Bagheri, deputy to Said Jalili, Iran’s nuclear negotiator.

“Continuing the negotiations in Istanbul could bring gains to both the parties concerned,” Bagheri told a news conference after talks with Syrian President Bashar al-Assad.

President Mahmoud Ahmadinejad, meanwhile, on Tuesday welcomed the upcoming talks in Istanbul, which he said would be followed by rounds of negotiations in Brazil and Iran.

The hardliner said world powers had applied a “lot of political pressure” against Iran and adopted “sanctions one after another to prevent Iran from becoming nuclear.”

“But Iranians won this political battle,” Ahmadinejad was quoted as saying by state news agency IRNA in a speech to the people of Karaj, west of Tehran.

“If you add a 100 more sanctions to your list, it will not even slightly affect the will of Iranians,” he said.

Iran’s nuclear programme has grown under the presidency of Ahmadinejad, attracting four rounds of UN sanctions and several other unilateral punitive measures from various countries, including the United States.

The Istanbul negotiations would be the second round between Iran and six world powers — Britain, China, France, Russia, United States and Germany — after talks resumed in Geneva earlier this month following a 14-month hiatus.

The West suspects that Tehran is pursuing an atomic weapons programme under the guise of a civilian nuclear work. Iran denies the charges and insists its activities have a purely peaceful purpose.

AFP: Iran could develop a nuclear bomb in about...