AP: Corruption charges against one of Mahmoud Ahmadinejad’s most trusted political advisers provided the latest evidence of deep rifts within the Iranian president’s own conservative political camp. 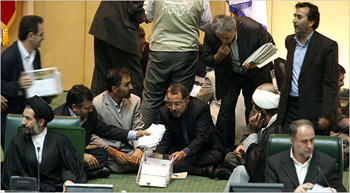 The challenge by Ahmadinejad’s rivals — one of them the head of the judiciary — could set the tone for a bitter fight leading up to the next big political moment in Iran, parliamentary elections less than a year away.

“This case isn’t going to bring down Ahmadinejad, but it may get very ugly,” said Abdulkhaleq Abdulla, a regional political analyst at Emirates University. “It’s a commentary on the troubled state of Iranian politics at the moment.”

Ahmadinejad has faced a growing internal backlash from conservative leaders — including influential parliament speaker Ali Larijani. They are upset by the president’s combative nature and deepening links with the vast military-economic network run by the Revolutionary Guard, Iran’s most powerful force which led the crackdown on the reformist movement after Ahmadinejad’s disputed re-election last year.

The political infighting escalated earlier this month when Ahmadinejad suddenly dismissed his longtime foreign minister, Manouchehr Mottaki, a close ally of Larijani. Many lawmakers and others denounced the move as further evidence of Ahmadinejad’s steamrolling style. He dumped Mottaki in apparent retaliation for disagreements that included control over foreign ministry posts.

The charges could do more damage to Ahmadinejad and the reputation he has cultivated as aloof from Iran’s powerful financial clans and foundations, many run by the Revolutionary Guard.

The developments revealed the increasingly complex political maneuvering within the Islamic Republic as it struggles with economic sanctions and growing international pressure to curb its production of nuclear fuel.

The judiciary last week said Rahimi is facing corruption charges that need to be investigated and will have to stand trial. The details of the accusations against him have not been made public since. Rahimi quickly denied the charges and was expected to present his side at a news conference, possibly later this week.

On Monday, Ahmadinejad’s office came to Rahimi’s defense, saying that his complaints against the accusations should be investigated, the official Islamic Republic News Agency reported.

But the rumblings have been coming for months against Rahimi, whose position as the top of 12 vice presidents gives him authority to meet visiting prime ministers and other dignitaries and lead Cabinet meetings in Ahmadinejad’s absence.

Some of Ahmadinejad’s political foes have frequently taken pot shots at Rahimi with allegations of financial misdeeds since a major government-linked embezzlement probe opened in April. At the time, conservative lawmaker Elias Naderan calling Rahimi the “leader of the corruption circle.”

Now, a full-scale investigation and possible trial could become a high-stakes proxy clash between Ahmadinejad and Larijani and his backers, who include his brother, judiciary chief Ayatollah Sadeq Larijani.

The immediate battles may be sporadic because all of Iran’s political establishment is currently engrossed in painful steps to trim government subsidies, which has already pushed fuel prices up to 400 percent higher.

The economic shock has brought waves of complaints against the government from all sides. Reformists have claimed the billions saved on subsidies will be funneled back to help boost Ahmadinejad and the Revolutionary Guard. Even some hard-liners — Ahmadinejad’s political base — have said the price hikes are too fast and too steep.

The rifts point to the next big political test in Iran — parliamentary elections in early 2012. The races will mark the first major balloting since the accusations of vote-rigging after Ahmadinejad’s June 2009 victory plunged Iran into its worst internal chaos since the 1979 Islamic Revolution.

It’s still uncertain whether the opposition movement can rebound in some form for the parliamentary campaign. But there’s little doubt that Larijani and his allies will make a run.

A strong showing would have the twin effect of embarrassing Ahmadinejad and sending a message to the ruling clerics, who have the final word on the candidates for the 2013 presidential election to replace lame duck Ahmadinejad.

“It is unlikely the (Rahimi) dispute will have particular repercussions in the short term,” said Hamid Reza Shokouhi, a political analyst in Tehran. “But its impact will be seen in the next parliamentary elections.”

It does, however, show Ahmadinejad’s shrinking political coterie.

“Supporters of Ahmadinejad are … a limited group now,” said Shokouhi.

But still a very formidable one.

Ahmadinejad continues to enjoy support from the two most potent forces in Iran: the Revolutionary Guard and Supreme Leader Ayatollah Ali Khamenei, who controls the theocracy and its almost limitless powers.

This has been enough to intimidate Ahmadinejad’s opponents from going too far. The lines, however, keep shifting in favor of bolder political challenges.

On Sunday, former foreign minister Mottaki was praised in a statement by 260 parliament members — all but 30 — in a direct slap against Ahmadinejad. Last month, dozens of lawmakers signed a petition seeking bring Ahmadinejad into the chamber for questioning over complaints including fiscal mismanagement.

The effort apparently sputtered before getting enough signatures, but it reinforced the sense that Ahmadinejad can be pressured openly without facing the wrath of the supreme leader.

“The fact that Rahimi is being attacked so publicly by conservatives — and even some hard-liners — suggests the political temperature is heating up,” said Shadi Hamid, a researcher on Gulf affairs at The Brookings Doha Center in Qatar.

A showdown over Rahimi could also feed into the claims that Ahmadinejad is increasingly embattled and trying to surround himself with staunch loyalists.

Rahimi was appointed as one of Iran’s 12 vice presidents in 2005 and rose to the top spot last year. He has taken part in sensitive political meetings, such as visits by Chinese officials.

Last summer, he called the U.S. dollar and euro “dirty” after Iran threatened to stop selling oil in the currencies to protest economic sanctions. He also called Australians “a bunch of cattlemen” and said South Korea “needed to be slapped” after both nations backed sanctions.